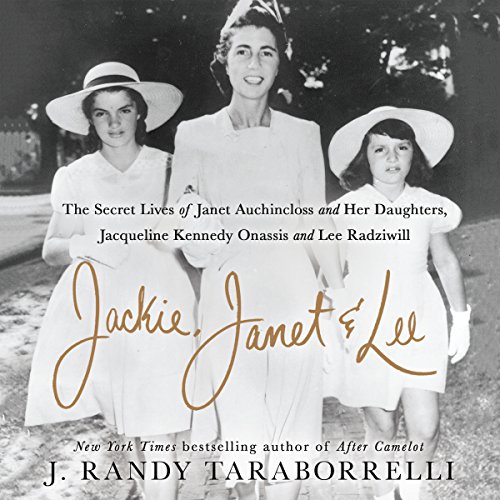 A dazzling audiobook biography of three of the most glamorous women of the 20th century: Jacqueline Bouvier Kennedy Onassis; her mother, Janet Lee Auchincloss; and her sister, Princess Lee Radziwill.

"Do you know what the secret to happily ever after is?" Janet Bouvier Auchincloss would ask her daughters, Jackie and Lee, during their tea time. "Money and Power," she would say. It was a lesson neither would ever forget. They followed in their mother's footsteps after her marriages to the philandering socialite "Black Jack" Bouvier and the fabulously rich Standard Oil heir Hugh D. Auchincloss.

Jacqueline Bouvier would marry John F. Kennedy Jr., and the story of their marriage is legendary, as is the story of her second marriage to Greek shipping magnate Aristotle Onassis. Less well known is the story of her love affair with a world-renowned architect and a British peer. Her sister, Lee, had liaisons with both of Jackie's husbands in addition to her own three marriages - to an illegitimate royal, a Polish prince, and a Hollywood director.

If the Bouvier women personified beauty, style, and fashion, it was their lust for money and status that drove them to seek out powerful men, no matter what the cost to themselves or to those they stepped on in their ruthless climb to the top. Based on hundreds of new interviews with friends and family of the Bouviers, among them their own half brother, as well as letters and journals, J. Randy Taraborrelli paints an extraordinary psychological portrait of two famous sisters and their ferociously ambitious mother.

Jackie, Janet & Lee will drop listeners directly into the gilded, tangled web of secrets surrounding one of the most recognizable families in American history.

"More gossipy than "Page Six," J. Randy Taraborrelli's latest celebrity biography, Jackie, Janet & Lee, compellingly narrated by Ann Marie Lee, bring you up close and personal with the ever fascinating, superrich and superpowerful clan of Janet Auchincloss...Though I started listening with a jaded ear, I found myself mesmerized by the intriguing, intricate details of the trials and tragedies in these women's lives." — BookPage

"Riveting. For all the sisters' dramatics, the true star of this particular show is decidedly neither the directionless Lee nor the determined Jackie. It is, in fact, the third figure in the book: Janet Bouvier Auchincloss...Taraborrelli brings her to splendid renewed life. His trick of turning incidents into highly colored tableaus threaded with dialogue makes excellent use of well-trodden material."— New York Times Book Review