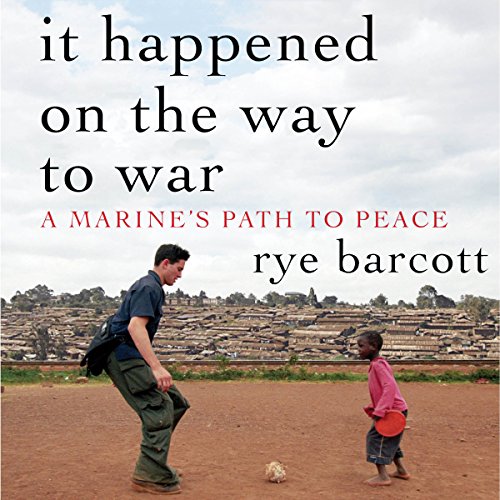 It Happened on the Way to War

It Happened on the Way to War

In 2000 Rye Barcott spent part of his summer living in the Kibera slum of Nairobi, Kenya. He was a college student heading into the Marines, and he sought to better understand ethnic violence - something he would likely face later in uniform. He learned Swahili, asked questions, and listened to young people talk about how they survived in poverty he had never imagined. Anxious to help but unsure what to do, he stumbled into friendship with a widowed nurse, Tabitha Atieno Festo, and a hardscrabble community organizer, Salim Mohamed. Together, this unlikely trio built a non-governmental organization that would develop a new generation of leaders from within one of Africa's largest slums.

Their organization, Carolina for Kibera (CFK), is now a global pioneer of the movement called Participatory Development, and was honored by Time magazine as a "Hero of Global Health". CFK's greatest lesson may be that with the right kind of support, people in desperate places will take charge of their lives and create breathtaking change.

Engaged in two seemingly contradictory forms of public service at the same time, Barcott continued his leadership in CFK while serving as a human intelligence officer in Iraq, Bosnia, and the Horn of Africa. Struggling with the intense stress of leading Marines in dangerous places, he took the tools he learned building a community in one of the most fractured parts of Kenya and became a more effective counterinsurgent and peacekeeper.

It Happened on the Way to War is a true story of sacrifice and courage and the powerful melding of military and humanitarian service. It's a story of what America's role in the world could be.

"A tremendous story of the power of friendship, love, and the transforming grace of God." (Archbishop Emeritus Desmond Tutu, Nobel Peace Prize Laureate)
"Every American should read this remarkable story by a remarkable man who fought as a Marine in Iraq and waged a battle against poverty, disease and ignorance in the slums of Nairobi, Kenya. Barcott’s prose evokes the sights and smells of the places he’s been, and the people in this book are not mere names but fully-rounded human beings, with all their virtues and flaws. His tale is cautionary—effecting real change in the world is never easy or cheap, and is often heartbreaking. But it is an equally inspirational story, showing that one individual, acting with courage and commitment, can make a difference." (Philip Caputo, author of A Rumor of War)
"An unforgettable odyssey. We need more of these wonderful affirmative tales of how good can triumph in Africa, as it can anywhere." (Alexander McCall Smith, author of The Ladies No. 1 Detective Agency)