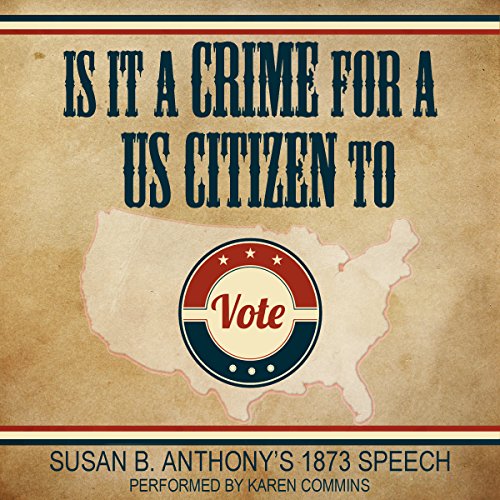 Is It a Crime for a US Citizen to Vote?

In 1872, Susan B. Anthony had spent 20 years advocating for various reforms in limiting alcohol and ending slavery. She is best known for her tireless efforts as a suffragist seeking equal and civil rights for women. In November 1872, Anthony was arrested in Rochester, NY, for illegally voting in the United States election. As a local newspaper wrote, “Voting illegally in her case means simply voting, for it is held that women cannot lawfully vote at all.” She was indicted and held for trial in early 1873. During March and April 1873, Anthony delivered an address titled “Is It a Crime for a US Citizen to Vote?” in 29 villages and towns of Monroe County, NY. The talk paralleled her attorney’s argument about women’s existing right to vote. While she wanted to educate everyone about the issue, she especially hoped to persuade the male population who could be called as jurors in the case. A Rochester newspaper printed her speech, giving it further circulation. When the district attorney requested and was granted a change of venue to Ontario County, Anthony canvassed the new county with her lecture. Anthony’s speech remains powerful and meaningful as the country approaches the 100th anniversary of the ratification of the 19th Amendment to the US Constitution, which prohibits states from denying or abridging the right to vote on the basis of gender.

Das sagen andere Hörer zu Is It a Crime for a US Citizen to Vote?