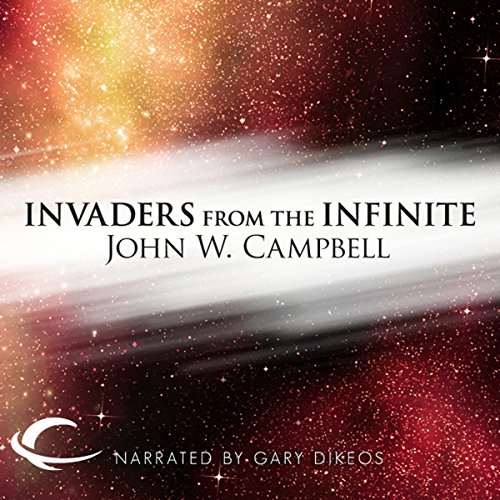 Invaders from the Infinite

Narrator Gary Dikeos maintains an even-tempered tone throughout his performance of John W. Campbell's science fiction tale. As Campbell's trio of space heroes Arcot, Wade, and Morley try to help a race of advanced dogs against an invading alien onslaught, Dikeos matches his pace to the action as it unfolds. Dikeos changes the pitch and speed of his baritone to give each hero a distinct personality, and listeners will enjoy his portrayal of their relationships to each other. Campbell's creative use of technology in his story harkens back to a more innocent era where anything seemed possible in science.

The alien spaceship was unthinkably huge, enormously powerful, apparently irresistible. It came from the void and settled on Earth, striking awe into the hearts of all who saw it. Its mission, however, was not conquest - but a call for help!

First contact was a job for a brilliant team of scientists: Arcot, Wade, and Morey. And what they received was an offer of an alliance against an invading foe so powerful that no known force could turn it back!

John W. Campbell's Invaders from the Infinite is a veritable odyssey of the universe, exploring world after world and uncovering cosmic secret after cosmic secret. Here is classic space opera that may never be surpassed!