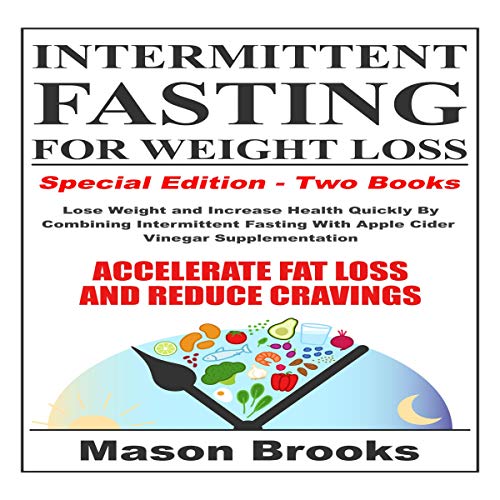 However, many people fall out of intermittent fasting because of the initial hunger pains and cravings, which can last a while sometimes. But if you take the apple cider vinegar during your fasting times, like in the mid-morning times, it will make it much easier to hold you over until your window of eating, plus you get all the incredible health benefits and fat-burning effects of adding apple cider vinegar into your diet.

ACV (apple cider vinegar) is well-known for reducing hunger and appetite and increasing health and metabolism. When you couple this with intermittent fasting, you have a very potent formula for weight loss and increased health.

Are you looking to lose weight, break a weight-loss plateau, and become healthier?

I personally have used intermittent fasting to burn off the last stubborn 12 pounds of fat I could not lose through exercise or diet. I did not have the willpower to do two- to three-day fasts, so daily intermittent fasting worked great for me; in fact, it worked so well that I can’t help but to do it almost every day now.

Countless scientific research trials have confirmed the results of fasting.

If you want to learn how intermittent fasting (fasting for 16 hours a day and then eating during an eight-hour window) has the ability to make you burn fat fast and become healthier, then this is the audiobook for you. It is a basic introduction to the science behind intermittent fasting, including some meal plans.

Apple cider vinegar has been called a superfluid, capable of doing everything from polishing your furniture to lowering your cholesterol levels. In this audiobook, we will go over some of the anecdotal and scientific benefits of this fluid. Here is some of what apple cider vinegar can do:

It helps reduce appetite: A study done in Sweden in 2005 discovered that people were more satisfied and fuller for longer periods when they ate bread along with vinegar as opposed to by itself.

It lowers fat levels in the body: Many people insist that apple cider vinegar can help to shed weight, but there isn’t as much scientific evidence for this. One study done in Japan, however, showed that overweight people who drank acetic acid with water over about three months showed significant weight loss.