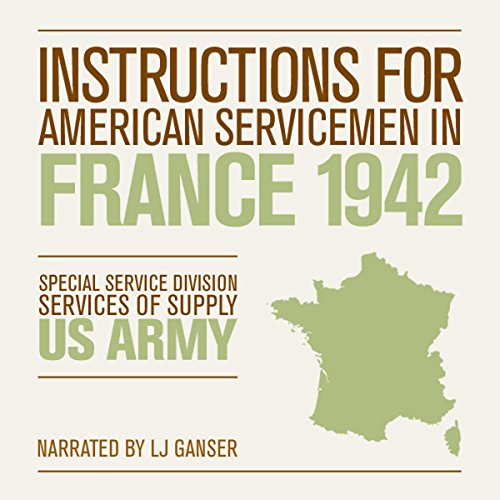 Instructions for American Servicemen in France 1942

As American forces awaited D-Day in England, the historically clueless U.S. Army got the idea that the troops could use preparation in French history, etiquette, customs, and language. This brief manual was intended to ameliorate the image of the “ugly American” and give the men first aid in befriending their allies. Romancing the women was left to soldiers’ previous experiences. Narrator L.J. Ganser meets no challenge with the government-issue English; his sonorous voice sounds like the cinema newsreels of the time. However, as he reads the table of useful phrases, both his English and French sound remarkably similar. And as all foreign travelers hope, “Where’s the toilet?” tops the list. Hearing the guide 69 years later reminds listeners of another era.

“You are about to play a personal part in pushing the Germans out of France. Whatever part you take—rifleman, hospital orderly, mechanic, pilot, clerk, gunner, truck driver—you will be an essential factor in a great effort.”

As American soldiers fanned out from their beachhead in Normandy in June of 1944 and began the liberation of France, every soldier carried that reminder in his kit. A compact trove of knowledge and reassurance, Instructions for American Servicemen in France during World War II was issued to soldiers just before they embarked for France to help them understand both why they were going and what they’d find when they got there.

After lying unseen in Army archives for decades, this remarkable guide is now available in audio.

Written in a straightforward, personal tone, the pamphlet is equal parts guidebook, cultural snapshot, and propaganda piece. A central aim is to dispel any prejudices American soldiers may have about the French. Warning soldiers that the defeat “is a raw spot which the Nazis have been riding” since the occupation began, Instructions is careful to highlight France’s long historical role as a major U.S. ally. Following that is a brief, fascinating sketch of the French character and stark reminders of the deprivation the French have endured under occupation. Yet an air of reassuring confidence pervades the final section of the pamphlet, which sounds like a straightforward tourists' guide to Paris and the provinces.

Written by anonymous War Department staffers to meet the urgent needs of the moment, with no thought of its historical value, Instructions for American Servicemen in France during World War II nevertheless brings to vivid life the closing years of World War II—when optimism was growing, but a long, demanding road still lay ahead.

"Narrator L. J. Ganser meets no challenge with the government-issue English; his sonorous voice sounds like the cinema newsreels of the time." (AudioFile)