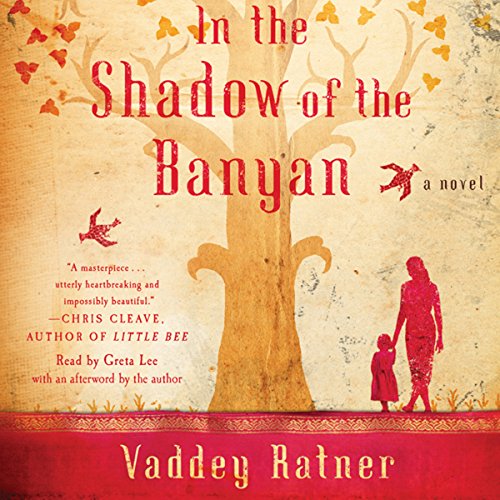 In the Shadow of the Banyan

Told from the tender perspective of a young girl who comes of age amid the Cambodian killing fields, this searing first novel - based on the author’s personal story - has been hailed by Little Bee author Chris Cleave as “a masterpiece… utterly heartbreaking and impossibly beautiful.”

For seven-year-old Raami, the shattering end of childhood begins with the footsteps of her father returning home in the early dawn hours bringing details of the civil war that has overwhelmed the streets of Phnom Penh, Cambodia’s capital. Soon the family’s world of carefully guarded royal privilege is swept up in the chaos of revolution and forced exodus.

Over the next four years, as she endures the deaths of family members, starvation, and brutal forced labor, Raami clings to the only remaining vestige of childhood - the mythical legends and poems told to her by her father. In a climate of systematic violence where memory is sickness and justification for execution, Raami fights for her improbable survival. Displaying the author’s extraordinary gift for language, In the Shadow of the Banyan is testament to the transcendent power of narrative and a brilliantly wrought tale of human resilience.

"This stunning memorial expresses not just the terrors ofthe Khmer Rouge but also the beauty of what was lost. A hauntingly powerful novel imbued with the richness of old Cambodian lore, the devastation of monumental loss, and the spirit of survival." ( Publishers Weekly)
"Vaddey Ratner's novel is ravishing in its ability to humanize and personalize the Cambodian genocide of the 1970s. She makes us look unflinchingly at the evil that humankind is capable of, but she gives us a child to hold our hand - an achingly believable child - so that we won't be overwhelmed. As we have passed from one century of horrors and been plunged into a new century giving us more of the same, In the Shadow of the Banyan is a truly important literary event." (Robert Olen Butler, author of A Good Scent from a Strange Mountain)
"Often lyrical, sometimes a bit ponderous: a painful,personal record of Cambodia's holocaust." ( Kirkus Reviews)

Das sagen andere Hörer zu In the Shadow of the Banyan