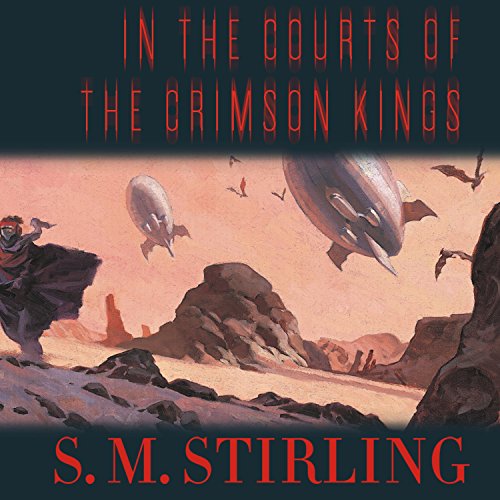 In the Courts of the Crimson Kings

In the Courts of the Crimson Kings

In the parallel world first introduced in S. M. Stirling's The Sky People, aliens terraformed Mars (and Venus) 200 million years ago, seeding them with life-forms from Earth. Humans didn't suspect this until the 20th century, but when the first probes landed on our sister worlds and found life - intelligent life, at that - things changed with a vengeance. By the year 2000, America, Russia, and the other great powers of Earth were all contending for influence and power amid the newly discovered inhabitants of our sister planets.

Venus is a primitive world. But on Mars, early hominids evolved civilization earlier than their earthly cousins, driven by the needs of a harsh world growing still harsher as the initial terraforming ran down. Without coal, oil, or uranium, their technology was forced onto different paths, and the genetic wizardry of the Crimson Dynasty united a world for more than 20,000 years.

Now, in a new stand-alone adventure set in this world's AD 2000, Jeremy Wainman is an archaeologist who has achieved a lifelong dream: to travel to Mars and explore the dead cities of the Deep Beyond, searching for the secrets of the Kings Beneath the Mountain and the fallen empire they ruled.

Teyud Zha-Zhalt is the Martian mercenary the Terrans hire as guide and captain of the landship Intrepid Traveller. A secret links her to the deadly intrigues of Dvor il-Adazar, the City That Is a Mountain, where the last aging descendant of the Tollamune Emperors clings to the remnants of his power...and secrets that may trace their origin to the enigmatic Ancients, the Lords of Creation who reshaped the Solar System in the time of the dinosaurs.

When these three meet, the foundations of reality will be shaken - from the lost city of Rema-Dza to the courts of the Crimson Kings.

"The splendid alternate universe Stirling invented in The Sky People has - quite justifiably - metamorphosed into a series....Stirling has hit an unexpectedly rich lode of creative ore." ( Kirkus)