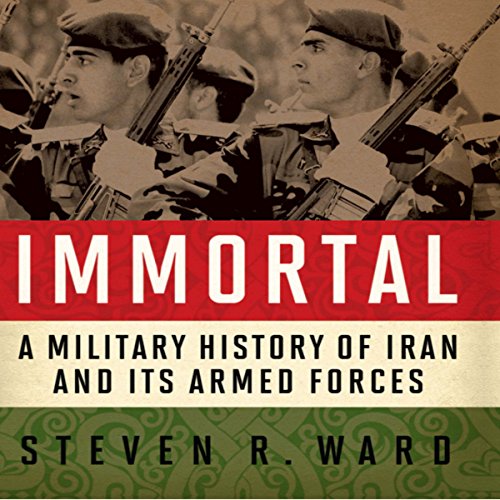 Immortal: A Military History of Iran and Its Armed Forces

Immortal: A Military History of Iran and Its Armed Forces

Immortal is the only single-volume English-language survey of Iran's military history. CIA analyst Steven R. Ward shows that Iran's soldiers, from the famed "Immortals" of ancient Persia to today's Revolutionary Guard, have demonstrated through the centuries that they should not be underestimated. This history also provides background on the nationalist, tribal, and religious heritages of the country to help listeners better understand Iran and its security outlook.

Immortal begins with the founding of ancient Persia's empire under Cyrus the Great and continues through the Iran-Iraq War (1980-1988) and up to the present.

Drawing on a wide range of sources including declassified documents, the author gives primary focus to the modern era to relate the buildup of the military under the last Shah, its collapse during the Islamic revolution, its fortunes in the Iran-Iraq War, and its rise from the ashes to help Iran become once again a major regional military power. He shows that, despite command and supply problems, Iranian soldiers demonstrate high levels of bravery and perseverance and have enjoyed surprising tactical successes even when victory has been elusive. These qualities and the Iranians' ability to impose high costs on their enemies by exploiting Iran's imposing geography bear careful consideration today by potential opponents.

Especially the involvement of the Iranian Palewi monarchy into the WWII Lend and Loan to the USSR was a novelty to me. I was not aware of the difficulties faced by the US military mission during convoying operations. Furthermore, the author provides essential détails appealing to the serious scolar of military history during the Iranian army's upgrad phase under Mohamad Reza Phalewi in the 1980ies. I am a great amateur of scientific and serious books in audioformat and I especially appreciated the great diction of the speaker. I recommend this audiobook and I will acquire a print copy of the work for my military affairs collection most certainly. An excellent job well done by a highly knowledgable scholar. Unfortunatelly I am unable to appreciate the impact of the author's employer's (CIA) redactional impact.