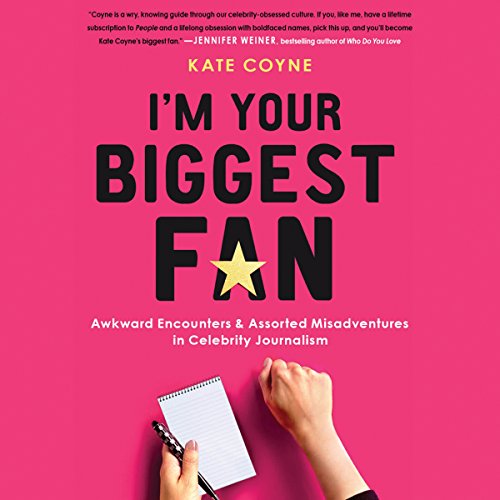 The Executive Editor of People Magazine provides an unfiltered and hilarious look at her life alongside the rich and famous, as she reveals how being a fan-girl lead to celebrity close encounters she could only dream of growing up.

From the NY Post's "Page Six" to Good Housekeeping and now People, Kate Coyne has spent years on the front lines of the entertainment industry, feeding our insatiable appetite for celebrity news and gossip. I'm Your Biggest Fan chronicles her journey from red-carpet reporter to upper-level editor and the countless surreal, surprising, and awkward interactions she had with stars along the way. Featuring A-listers such as Michael Douglas (who warned her about tabloid reporting), Tom Cruise (whose behavior will surprise you), and Tom Hanks (who, yes, is wonderful), Coyne's stories reveal insights about pop culture's biggest icons-and the journalist who has followed their every move.

"Candid, hilarious, and juicier than any tabloid. Kate Coyne will have you flipping pages and begging for more." (Jenny Mollen, New York Times best-selling author)
"Kate Coyne's funny, warm-hearted stories about her dances with the stars is a delectable, candy-coated treat. From a gut check about Monica Lewinsky to lavish lunches with Wynonna to stern admonishments from Michael Douglas and long days with Kate Gosselin, Coyne emerges as a wry, knowing guide through our celebrity-obsessed culture. If you, like me, have a lifetime subscription to People and a lifelong obsession with boldfaced names, pick this up, and you'll become Kate Coyne's biggest fan." (Jennifer Weiner, best-selling author, Who Do You Love)