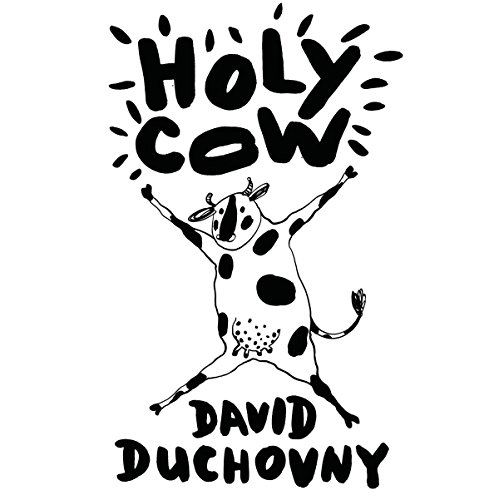 A rollicking, globe-trotting adventure with a twist from the star of The X-Files and Californication, featuring Elsie, an unforgettable four-legged heroine.

Holy Cow by David Duchovny is a comic delight that will thrill fans of Jasper Fforde and Ben Aaronovitch. And anyone who enjoys a witty wisecrack in a novel.

Elsie Bovary is a cow and a pretty happy one at that. Until one night,Elsie sneaks out of the pasture and finds herself drawn to the farmhouse. Through the window she sees the farmer's family gathered around a bright Box God--and what the Box God reveals about something called an "industrial meat farm" shakes Elsie's understanding of her world to its core.

The only solution? To escape to a better, safer world. And so a motley crew is formed: Elsie; Shalom, a grumpy pig who's recently converted to Judaism; and Tom, a suave turkey who can't fly,but can work an iPhone with his beak. Toting stolen passports and slapdash human disguises, they head for the airport...

"David Duchovny is a very smart and wryly entertaining actor, and now, novelist. Although I will never publicly admit to jealousy, I am having him killed." (Rob Lowe)