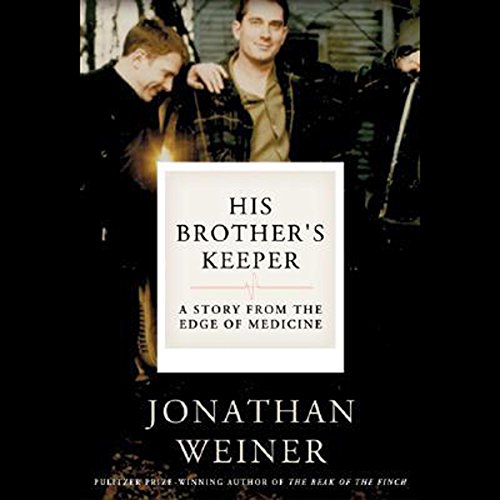 Jamie, Stephen, and Ben are the Heywood brothers, adoring daredevil sons of a retired therapist and MIT professor. At 29, Stephen, a carpenter, is diagnosed with Amyotrophic Lateral Sclerosis (ALS), or Lou Gehrig’s Disease, a progressive fatal condition that bombs nerve cells in the brain and spinal cord, collapsing voluntary muscle control, and making it hard to chew, swallow, speak, even breathe. Paralysis is nearly certain. His Brother’s Keeper: A Story From the Edge of Medicine, by Pulitzer Prize-winner Jonathan Weiner chronicles the Heywood family’s deeply human, defiant response to Stephen’s grim prognosis. Victor Bevine narrates with perceptive, poignant stillness. His meditative pacing steadies the frantic deadline of the premise: find a solution or lose Stephen. Bevine applies the same pebble-smooth reverence to Weiner’s own sorrow when he learns his mother, Ponnie, is dying from a similar, rare neurogenerative disease.

As brother-built dynasties go, the Heywoods are enthralling. Jamie, the eldest, is a charismatic compulsive talker who quits his job to cure ALS. A trained mechanical engineer, Jamie studies gene therapies and hires “guerilla scientists” to develop experimental treatments and pioneer stem-cell research. In the process, he ruins his marriage to Melinda — an exuberant belly dancer with a PhD in medieval French literature.

Stephen is six-foot-three and blindingly handsome. He’s wry and observant, a self-taught architect who finds his calling rebuilding old, rotting historical homes. The worthy anchor of His Brother’s Keeper, Stephen despises pity and fuss. He marries, fathers a son, and works with his hands as long as he can. “The more he lost, the stronger he seemed,” Weiner notes of Stephen, by then, skeletal and wheelchair-bound, nourished by liquid Ensure his mother, Peggy, pours into his stomach tube. Ben is the youngest Heywood, an engineer like Jamie and their father. He’s creative and logical, a practical risk-taker as droll and dynamic as the rest of his tribe. Still, and always, though, the love story belongs to Jamie and Stephen. —Nita Rao

Stephen Heywood was 29 years old when he learned that he was dying of ALS - Lou Gehrig's disease. Almost overnight, his older brother, Jamie, turned himself into a genetic engineer in a quixotic race to cure the incurable. His Brother's Keeper is a powerful account of their story, as they travel together to the edge of medicine. The book brings home for all of us the hopes and fears of the new biology.

In this dramatic and suspenseful narrative, Jonathan Weiner gives us a remarkable portrait of science and medicine today. We learn about gene therapy, stem cells, brain vaccines, and other novel treatments for such nerve-death diseases as ALS, Alzheimer's, and Parkinson's - diseases that afflict millions, and touch the lives of many more. "The Heywoods' story taught me many things about the nature of healing in the new millennium," Weiner writes. "They also taught me about what has not changed since the time of the ancients and may never change as long as there are human beings - about what Lucretius calls 'the ever-living wound of love".

"His Brother's Keeper may focus on the promise of science, but the mystery of transcendence also speaks from its pages loud and clear." (Scientific American)
"Weiner has a master's eye for the telling detail and a spare, often poetic style. His terse recounting of the seminal advances and setbacks in genetic engineering in the late 1990s provides the scientific counterpoint to the Heywood family drama." (The Washington Post)