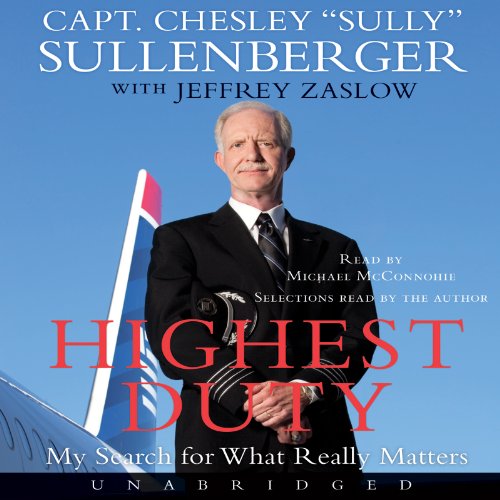 This inspiring book tells the story of U.S. Airways pilot Captain "Sully" Sullenberger. Listeners hear not just of his emergency landing on the Hudson but of the life events that prepared him for that moment. As the author himself says, "My entire life led me safely to that river." Michael McConnohie's steady, matter-of-fact narration is very much in keeping with Sully's own character. McConnohie captures the author's refreshingly modest tone as he conveys his life story. Anecdotes about how he learned to fly as a teen, his years in the Air Force, his life as husband and father all build to create a sense of the qualities - hard work, perseverance, passion - that equipped Sully for his calmly heroic act.

In this inspirational autobiography, Captain "Sully" Sullenberger, the airline pilot whose emergency landing on the Hudson River earned the world's admiration, tells his life story and talks about the essential qualities that he believes have been so vital to his success.

In January 2009 the world witnessed one of the most remarkable emergency landings in history when Captain Sullenberger brought a crippled US Airways flight onto the Hudson River, saving the lives of all of the passengers and crew aboard. The successful outcome was the result of effective teamwork, Sully's dedication to airline safety, his belief that a pilot's judgment must go hand-in-hand with - and can never be replaced by - technology, and 40 years of careful practice and training.

From his earliest memories of learning to fly as a teenager in a crop duster's single-engine plane in the skies above rural Texas to his years in the United States Air Force at the controls of a powerful F-4 Phantom, Sully describes the experiences that have helped make him a better leader, particularly the importance of taking responsibility for everyone in his care. And he talks about what he believes is at the heart of America's "can do" spirit: the very human drive to prepare for the unexpected and to meet it with optimism and courage.

His wife, Lorrie, has been a pillar of support through all the highs and lows that life has offered, from the challenges of commercial flying to the birth of their two daughters, from financial struggles to the event of January 15, 2009. Though the world may remember Sully as the hero of Flight 1549, the legacy he desires even more is that of a loving husband and father.

Highest Duty is the intimate story of a man who has grown up to embrace what we think of as quintessential American values: leadership, responsibility, commitment to hard work, and service to others. And it is a narrative that reminds us that cultivating seemingly ordinary virtues can prepare us to....

Please note: This title has also been released as Sully: My Search for What Really Matters.

Great story of an American hero

This is definitely a great recount of flight 1549 and a must-listen-to for everybody interested in aviation and hero stories. Capt. Chesley "Sully" Sullenberger is a very decent and dedicated man from Texas and it is fun to get him to know. Some chapters are very personal (adopted children, suicide of his father, death of his mother, etc.), which gives it even more credit. Unfortunately it does not cover all of the investigation that followed the landing in the Hudson river, most of which is shown in the movie starring Tom Hanks.