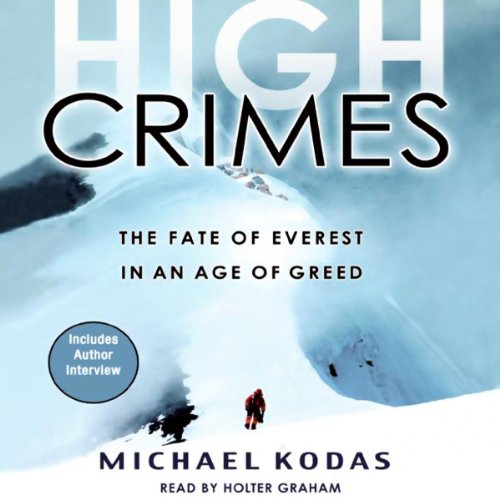 In the years following the publication of Into Thin Air, much has changed on Mount Everest. Among all the books documenting the glorious adventures on mountains around the world, and the unique perils and challenges of Mount Everest, none details how the recent infusion of wealth into the mountains is reacting with the age-old lust for glory to draw crime to the highest places on the planet - how a mountain's ability to reduce climbers to their essential selves is revealing villains as well as heroes, greed as well as selflessness.

This audiobook will take listeners on a harrowing tour of the criminal underworld on the slopes and peaks of the world's most majestic mountain.

Some of the stories included here are the tragic story of Nils Antezana, a climber who died on Everest after he was abandoned by his guide. Also included is the author's own summit story, as he participated in the Connecticut Everest Expedition, which would never have followed George Dijjmarescu and Lhakpa Sherap to the Himalya had news of the couple's climb with the Romanian team the previous year made it to the United States. But as they neared the frigid peril of Everest, the charming couple turned increasingly hostile. Women on the team held little power and were instead threatened, stalked, and harassed before a final assault. Those that tried to stand against the violence, theft, and intimidation found the worst of the peril they encountered on Everest had followed them home to Connecticut.

Beatings, thefts, drugs, prostitution, coercion, threats, and abandonment on the highest slopes of Everest and other mountains have become the rule rather than the exception. Kodas describes many of these experiences and explores the larger issues these stories raise with thriller-like intensity.