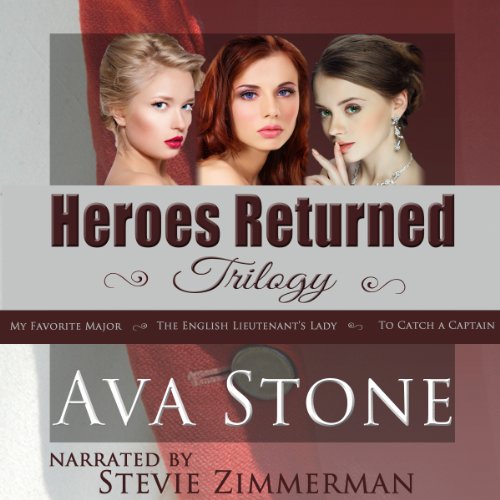 Heroes Returned Trilogy is a compilation of three books - My Favorite Major, The English Lieutenant's Lady, and To Catch a Captain...

When her longtime fiancé returns home from the victory at Waterloo, Amelia Pritchard suspects he's not the noble, upstanding gentleman she's always believed him to be. After breaking their betrothal, she flees to London with the hope of starting her life over and putting the past firmly behind her.

Battle weary Major Philip Moore finds himself intrigued by the lovely Miss Pritchard. Though he's recovering from a broken heart of his own, more than just his honor urges him to protect the lady when her nefarious ex-beau arrives in Town with the most wicked of intentions.

Phoebe Greywood has waited quite a while for her betrothed to return home from the Peninsular Wars, but when he finally does, she's heartbroken to discover he's changed in more ways than one. Most alarmingly, he doesn't seem to care one whit about her anymore. But one man who hasn't changed a bit after his time on the continent is her betrothed's boorish brother…

When the truth of Tristan's feelings for Phoebe become clear, his own honor is put to the test and all of his plans for the future are turned upside down.

To Catch a Captain

After receiving what seems like an offer of employment from an English countess, orphan Bridget Kelly leaves her uncle's house in Dublin to make her own way in the world. But making her way in England is easier said than done, especially for an innocent Irish lass with no family or connections. In fact, she'll be lucky if she can make it to Derbyshire alive.