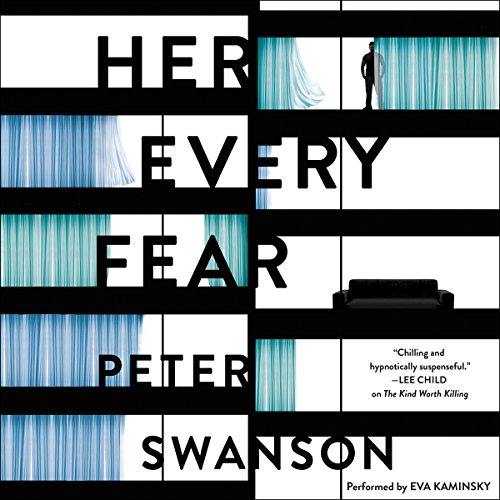 The author of the wildly popular The Kind Worth Killing returns with an electrifying and downright Hitchcockian psychological thriller - as tantalizing as the cinema classics Rear Window and Wait Until Dark - involving a young woman caught in a vise of voyeurism, betrayal, manipulation, and murder.

The danger isn't all in your head.

Growing up, Kate Priddy was always a bit neurotic, experiencing momentary bouts of anxiety that exploded into full-blown panic attacks after an ex-boyfriend kidnapped her and nearly ended her life. When Corbin Dell, a distant cousin in Boston, suggests the two temporarily swap apartments, Kate, an art student in London, agrees, hoping that time away in a new place will help her overcome the recent wreckage of her life.

But soon after her arrival at Corbin's grand apartment on Beacon Hill, Kate makes a shocking discovery: his next-door neighbor, a young woman named Audrey Marshall, has been murdered. When the police question her about Corbin, a shaken Kate has few answers and many questions of her own - curiosity that intensifies when she meets Alan Cherney, a handsome, quiet tenant who lives across the courtyard, in the apartment facing Audrey's. Alan saw Corbin surreptitiously come and go from Audrey's place, yet he's denied knowing her. Then, Kate runs into a tearful man claiming to be the dead woman's old boyfriend, who insists Corbin did the deed the night that he left for London.

When she reaches out to her cousin, he proclaims his innocence and calms her nerves, until she comes across disturbing objects hidden in the apartment - and accidently learns that Corbin is not where he says he is. Could Corbin be a killer? And what about Alan? Kate finds herself drawn to this appealing man who seems so sincere, yet she isn't sure. Jet-lagged and emotionally unstable, her imagination full of dark images caused by the terror of her past, Kate can barely trust herself. So how could she take the chance on a stranger she's just met?

Yet the danger Kate imagines isn't nearly as twisted and deadly as what's about to happen. When her every fear becomes very real.

And much, much closer than she thinks.

Told from multiple points of view, Her Every Fear is a scintillating, edgy novel rich with Peter Swanson's chilling insight into the darkest corners of the human psyche and virtuosic skill for plotting that has propelled him to the highest ranks of suspense, in the tradition of such greats as Gillian Flynn, Paula Hawkins, Patricia Highsmith, and James M. Cain.

"Like all good psychological thrillers, this one keeps listeners on edge.... Swanson's story is compelling. [Narrator Eva] Kaminsky brings it all to life - the fear and panic and the tenuous nature of trusting ourselves and others." ( AudioFile)

I enjoyed listening to this thriller by Peter Swanson, though I have to admit that I found his book 'The Killing Kind' MUCH better, especially the end. Anyway, the way the author anchors his stories in the real world is something I appreciate, and the plot is good. I could have done without the part when the heroine talks about believing in god after all, about being grateful for the faithful who supported her during her difficulties. But apart from this, this is a book to listen to on a rainy day, or when you need to take your mind off something else.