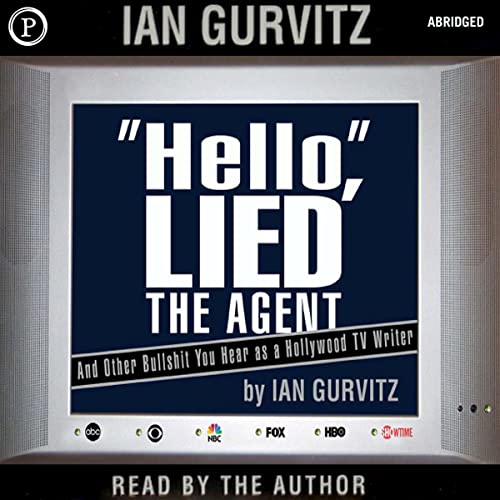 As prevalent as TV is in our lives, most of us have no concept of what goes into creating a show, getting it on the air, and keeping it on. Perhaps we assume that the people in charge simply decide what amuses them at the moment, make those shows, stick them on, and wait to see if the public responds. Or maybe they just throw darts at a board?

The truth, as with most things, is more complicated. In 'Hello', Lied the Agent, Ian Gurvitz has produced a corrosively funny insider's look at what being a television writer is really all about. In his personal journal, he details two years in the life of a Hollywood television writer—the dizzying ups and downs, the rewrites, the executives, the pitch meetings, the table readings, the studios and networks and execs in a riveting expose of the business.

"It occurred to me that keeping a journal while I was going through the development process might illuminate a side of the business few people get to see, and give them a behind the scenes (God, I hate that overused ET phrase) look at the day-to-day experience of being a writer in Hollywood. OK, that's partly bullshit. I'm not that altruistic. The truth is, after 20 years in the trenches, I found myself bitching about many aspects of the business and needed an outlet, which left either writing a book, doing stand up, seeing my shrink more often or suffering in silence. But since I don't have the balls to try stand-up, there's no reason to waste a shrink visit bitching about the business when I've got more seriously f***ed-up issues to deal with, and there's no money in suffering in silence—that left book. Here it is...."