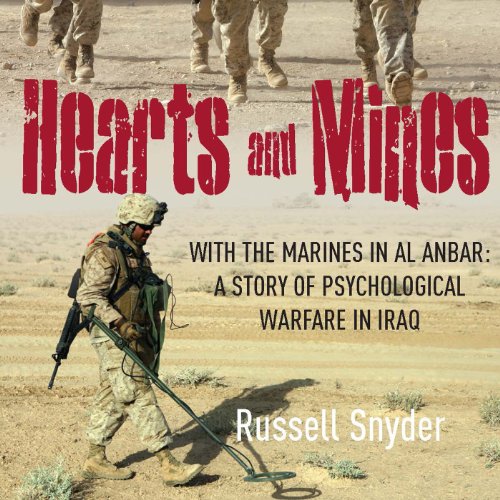 This is a true story of war, the story of one man's transformation as he retraces the mine-strewn roads of a land itself transformed by mankind's most shockingly inhuman practice. It is the firsthand account of a member of one of the United States Army's three-man Tactical Psychological Operations Teams, groups of men tasked with winning the hearts and minds of Iraq's civilian population through leaflets, loudspeakers, conversation, and bribery. Transcribed from and inspired by the author's personal wartime journal, it is a story of introspection. It relates how the feelings of eagerness and uncertainty in a young man unfamiliar with war were replaced with the dread knowledge that, buried within his soul, beneath a facade of goodwill and morality, lurked the capacity to kill his fellow men.

There are scenes of battle retold in Hearts and Mines. There are descriptions of the feelings of seeing once-familiar human bodies destroyed beyond recognition. Some days are described as being full of hope and appreciation for the beauty of the world, others with despair for the omnipresent cruelty and destruction which has a habit of consuming men when they feel unaccountable for their actions. It captures the sensory experience of living in a singular environment full of strange plants and animals, friends true and false, and determined enemies, encapsulating the existential fear of mortar and rocket attacks, and the ever-present threat of IEDs, as well as the ridiculousness of military bureaucracy, such as was demonstrated by a sergeant major's decision to punish graffiti artists by removing the doors of all the camp's toilets.

In late 2001 Russell Snyder joined the United States Army as a psychological operations specialist. As a member of the 9th PSYOP Battalion, the army's only active-duty, tactical psychological operations unit he deployed to Iraq, the experience that inspired him to write Hearts and Mines. Subsequently he was deployed twice more to Iraq. He is a recipient of various military awards including the Bronze Star medal. Now a civilian, he lives in Raleigh, North Carolina.