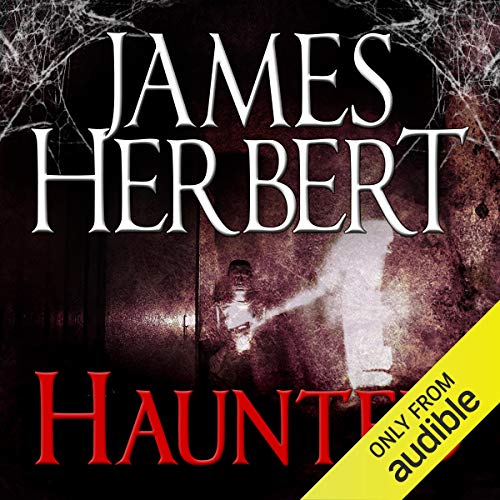 A wildly popular master of suspense throughout the 1980s, James Herbert’s fast-paced, high-urgency storytelling has found new life in the audiobook format, where his pause-resistors have staked their place for posterity. The action-packed immediacy of his work lends itself well to vocal interpretation, and fervent English actor Steven Pacey (Blake’s 7, Distant Shores) proves it with his crisp, quick-clipped conveyance of Haunted, in which Herbert introduces dogged reporter David Ash. When Ash investigates claims of paranormal activity at an aged rural estate, he suddenly finds himself trapped inside the haunted house, chased by nightmarish ghosts from his past. With riveting psychological suspense that recalls such greats as Agatha Christie and Stephen King, Haunted weaves elements of horror, mystery, and fantasy to spine-chilling effect.

A ghostly twist. Three nights of terror at the house called Edbrook. Three nights in which David Ash, there to investigate a haunting, will be victim of horrifying games. Three nights in which he will face the blood-chilling enigma of his own past. Three hideous nights before Edbrook's dreadful secret will be revealed...And the true nightmare will begin.to the surface, tormenting him, refusing to let him rest. The memory of what he once had been.

James Herbert was one of Britain’s greatest popular novelists and our #1 best-selling writer of chiller fiction. Widely imitated and hugely influential, he wrote 23 novels which have collectively sold over 54 million copies worldwide and been translated into 34 languages. Born in London in the forties, James Herbert was art director of an advertising agency before turning to writing fiction in 1975.

His first novel, The Rats, was an instant bestseller and is now recognised as a classic of popular contemporary fiction. Herbert went on to publish a new top ten best-seller every year until 1988. He wrote six more bestselling novels in the 1990s and three more since: Once, Nobody True and The Secret of Crickley Hall. Herbert died in March 2013 at the age of 69.

“Herbert was by no means literary, but his work had a raw urgency. His best novels, The Rats and The Fog, had the effect of Mike Tyson in his championship days: no finesse, all crude power. Those books were best sellers because many readers (including me) were too horrified to put them down.” (Stephen King)

“There are few things I would like to do less than lie under a cloudy night sky while someone read aloud the more vivid passages of Moon. In the thriller genre, do recommendations come any higher?” (Andrew Postman, The New York Times Book Review)

“Herbert goes out in a blaze of glory” ( Daily Mail)