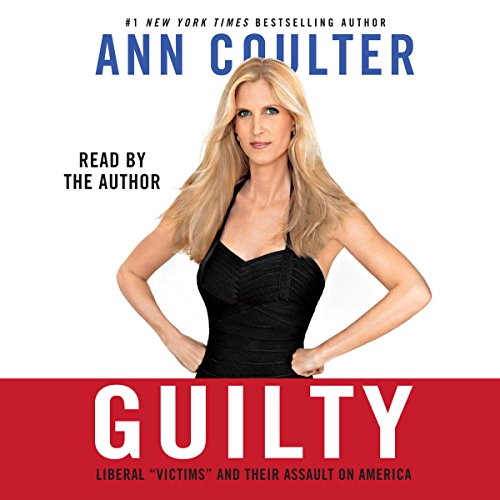 "Liberals seem to have hit upon a reverse Christ story as their belief system. He suffered and died for our sins; liberals make the rest of us suffer for sins we didn’t commit."

Who are the victims here? To hear liberals tell it, you'd think they do nothing but suffer at the hands of ruthless entities like the "Republican Attack Machine" and Fox News. Really?

It’s just another instance of the Big Lie, of course, told so often that some people have actually started to believe it. In Guilty, Ann Coulter explodes this myth to reveal that when it comes to bullying, no one outdoes the Left. Citing case after case, ranging from the hilariously absurd to the shockingly vicious, Coulter dissects these so-called victims who are invariably the oppressors. For instance:

One essential and recurring truth about self-righteous liberals, says Coulter, is that "They viciously attack all while wailing that they are the true victims." With Guilty - a mordantly witty and shockingly specific catalog of offenses that liberals would rather we ignore and forget - Ann Coulter presents exhibits A through Z.