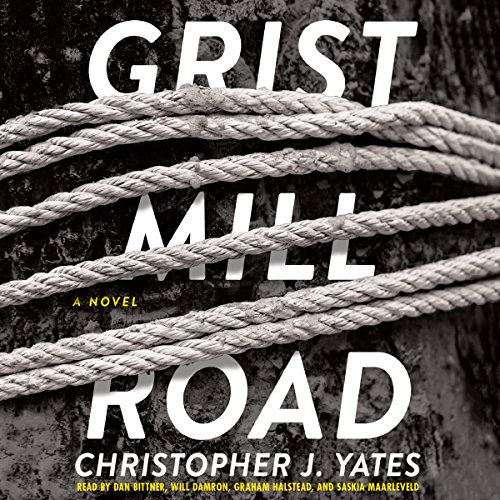 The highly anticipated new audiobook from the author whose debut was called "the smart summer thriller you've been waiting for..." (NPR's All Things Considered) and was named a Book of the Year by NPR and an Entertainment Weekly Must-List Pick

Christopher J. Yates' cult hit Black Chalk introduced that rare writerly talent: a literary author who could create a plot with the intricacy of a brilliant mental puzzle and with characters so absorbing that listeners are immediately gripped. Yates' new audiobook does not disappoint.

Grist Mill Road is a dark, twisted, and expertly plotted Rashomon-style tale. The year is 1982; the setting an Edenic hamlet some 90 miles north of New York City. There, among the craggy rock cliffs and glacial ponds of timeworn mountains, three friends - Patrick, Matthew, and Hannah - are bound together by a terrible and seemingly senseless crime. Twenty-six years later, in New York City, living lives their younger selves never could have predicted, the three meet again - with even more devastating results.

"Narrators Dan Bittner, Saskia Maarleveld, and Graham Halstead do a marvelous job delivering first-person accounts leading to the...terrible crime. Will Damron provides a taut narration of the 2008 events, which are told omnisciently in the third person. It's a labyrinth of shifting perspectives, but the narrators keep this grim story focused and mesmerizing." (AudioFile)

"[Dan] Bittner, Will Damron, Graham Halstead, and Saskia Maarleveld bring the multidimensional characters vividly to life and narrate this complex and twisting tale of psychological suspense in a manner that keeps the listener involved and eager to follow along to its harrowing conclusion." — Booklist