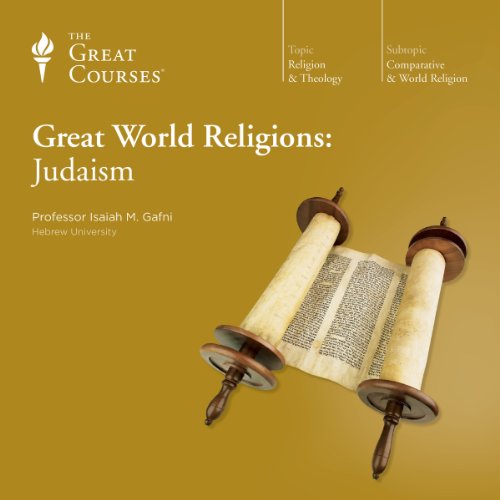 What is the essence of Judaism? Is it the Ten Commandments, given by God to Israel at Mount Sinai? Or is it the totality of teachings in the Hebrew Bible? Or is it symbolized by something outside the Bible? Find out with this illuminating 12-lecture investigation of the fundamental concepts, beliefs, issues, and themes in the ever-changing, 4,000-year-old saga of Judaism, one of the world's most ancient and influential faiths. Throughout the lectures, you'll study Judaism from within - as it was understood by its adherents in the past and by those who practice or identify with Judaism today. This series covers the critical stages of Jewish history; the centrality of such books as the Torah, Talmud, Midrash, and Mishna; the manner in which the Jewish calendar and Jewish law, or Halakha, define daily life; and much more. It also illustrates how Judaism reinvented itself by embracing the rabbinical tradition after the destruction of the Second Temple in 70 C.E. and considers the thinking of such philosophers as Philo of Alexandria and Moses Maimonides.

Here are just a few of many fascinating facts and insights you'll glean from learning with these lectures. Among many Jews today the Hebrew Bible is known by the Hebrew acronym TaNaKH, which is composed of the first Hebrew letters in each of the three component parts of the Bible. Judaism's calendar is arguably the most important unifying factor in what is otherwise a frequently fragmented religious community (the key to the calendar is that it is both lunar and solar). Judaism has no dogma or creed in the Christian sense.