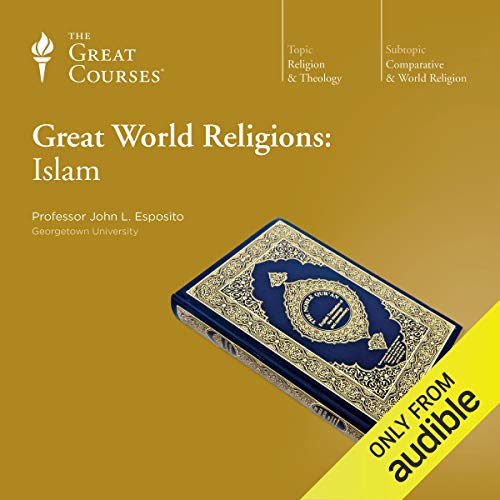 How familiar are you with the world's second-largest and fastest-growing religion? In these 12 lectures, Professor Esposito guides you through the facts and myths surrounding Islam and its more than 1.2 billion adherents. Many in the West know little about the faith and are familiar only with the actions of a minority of radical extremists, but this lecture series will help you better understand Islam's role as both a religion and a way of life, and its deep impact on world affairs both historically and today.

What does the future hold for Islam and the West in the new century? How will it change under the influence of conservatives, reformers, and extremists? Moving from Muhammad to the present, from the 7th to the 21st centuries, you'll explore Muslim beliefs, practices, and history in the context of its significance and impact on Muslim life and society through the ages, as well as world events today. Topics you'll cover include the life and legacy of the prophet Muhammad; the nature and true meaning of jihad; the Muslim beliefs about other faiths such as Judaism and Christianity; Islamic contributions to mathematics, science, and art; the intricate relationship between Islam, modernization, capitalism, and democracy; and much more.

Professor Esposito takes a closer look at the historical development of two great Islamic institutions: Islamic law and Islamic mysticism. And he examines the worldwide "struggle for the soul of Islam" occurring today between conservatives and reformers, mainstream Muslims and extremists.

The other side of the medallion

Prof. Esposito provides an informative account of the rise of Islam, its subsequent changes and resulting denominations. The listener gets an insight into several schools of islamic thought throughout its 1500 year history, from law over matters of religious observance to more modern concerns like the roles of muslim women. Separated from mainstream and alarmist voices about the threats from religious extremists, Esposito manages to walk through this minefield with a level-head. He guides his audience to a more balanced understanding of islamic findamentalism and the views which mainstream islam has on it, and not only presents the Western standard perpective. A strong recommendation for everyone looking to learn sth about Islam and its diverse believers.