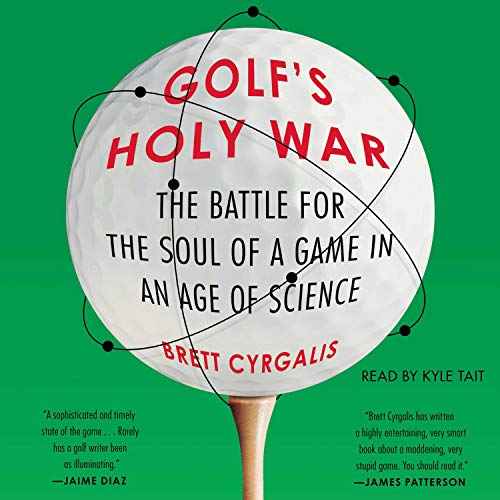 The world of golf is at a crossroads. As technological innovations displace traditional philosophies, the golfing community has splintered into two deeply combative factions: the old-school teachers and players who believe in feel, artistry, and imagination, and the technical-minded who want to remake the game around data - attack angles, spin rotation, ball speed, and more. In Golf’s Holy War, Brett Cyrgalis takes listeners inside the heated clash playing out from weekend hackers to Tiger Woods.

At the Titleist Performance Institute in Oceanside, California, golfers clad in full-body sensors target weaknesses in their biomechanics, while others take part in mental exercises designed to test their brain’s psychological resilience. Meanwhile, coaches like Michael Hebron purge golfers of all technical information, tapping into the power of intuitive physical learning by playing rudimentary games. From historic St. Andrews to manicured Augusta, experimental communes in California to corporatized conferences in Orlando, from William James to Ben Hogan to theoretical physics, the factions of the spiritual and technical push to redefine the boundaries of the game.

But Golf’s Holy War is more than just a story about golf - it's a story about modern life, and how we are torn between resisting and embracing the changes brought about by the advancements of science and technology. It's also a story about historical legacies, the enriching bonds of education, and the many interpretations of reality.