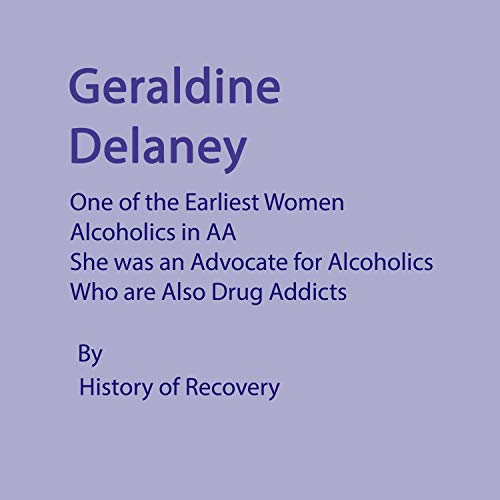 Mrs. Delaney’s first introduction to AA was when her brother, Oscar, sobered up with the help of Bill Wilson. It was seven years later, after battling her own alcoholism that she found herself, one of the first women, in the rooms of AA.

Mrs. D was a pioneer in the field of alcoholism treatment and was instrumental in the treatment and recovery of many alcoholics and their family members. She inspired thousands of people to regain their lives and to live sober. Through her own example of 50 years of sobriety, Mrs. Delaney helped people come to believe that hope can become fact.

She believed it - she lived it and devoted her life to helping alcoholics, addicts, and their family members. She felt that with discipline, structure, and tincture of time, recovery was possible. Although she was tough as nails, those who knew Mrs. D knew she truly loved her students. As she said, I loved them enough to tell them the truth.

Mrs. Delaney spent a lot of time with Lois Wilson and the Alanon women in the early days since there were so few women in AA. As a result, she became a strong believer in treating the family and developed one of the first in-house family residential programs. She often said the family can undo in five minutes what has taken five months to put together.

Mrs. Delaney was loved and respected and yes, feared by many - there is a large group of alumni who got sober by attending Alina Lodge and yet another group who sobered up when threatened with a visit to The Lodge.

Born in Stonington, IL, Mrs. Delaney was the wife of the late Thomas F. Delaney. She received her formal education at Knox College in Galesburg, IL, and the University of Illinois. She was honored with an honorary Doctorate of Humane Letters from Seton Hall University and has received numerous awards throughout her career.