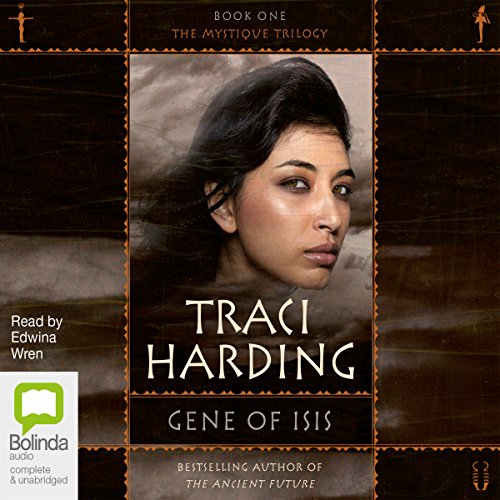 Mia is a 21st-century academic, Ashlee is a 19th-century psychic, and Lilac is a 13th-century priestess; what these three women have in common may open a gateway to the Gene of Isis. Traci Harding's fanciful first entry in her Mystique Trilogy feels like The DaVinci Code meets Indiana Jones with an all-female cast. Edwina Wren's performance is formal but playful. Her voice has an old-fashioned edge to it, suited to the varied time periods and otherworldliness of this audiobook.

The latest trilogy by a best-selling author.... Mia Montrose is a 21st-century Australian woman with a doctorate in ancient languages who has just scored the most promising job of her career. When Mia experiences mysterious happenings and forces beyond her control, she begins to understand that history does not always stay in the past.

Ashlee Granville is a 19th-century clairvoyant, forced to suppress her talents as she enters the marriage market of English upper-class society. But Ashlee is not a girl who likes to bow to the inevitable – she has plans of her own.

Lillet du Lac is a 13th-century woman, priestess of an ancient order now protected by the Cathar faith, who are making their last stand against the Roman Catholic Franks at the giant hill fort of Montségur. As the castle falls, Lillet escapes with something more valuable than any of their lives.

Despite the time, distance, and cultures that separate them, these women have several things in common. They belong to an ancient bloodline of Grail kings, protected by a Sion knight named Albray, and they are each compelled to visit an ancient mountain in the Sinai. This mountain contains the keys that may unlock a gateway to a dimension of light and the Gene of Isis.