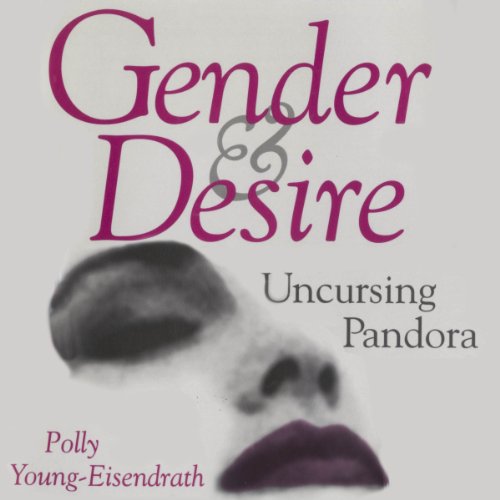 Contradictory and provocative pathways crisscross the terrain of gender among contemporary psychologists and psychoanalysts. Clearing a path through this terrain, Polly Young-Eisendrath describes and illustrates issues of gender and desire among women and men.

Young-Eisendrath introduces three world views: premodern, modern, and postmodern. Then, she calls our attention to how we shape reality and clearly explains how a lived postmodern philosophy is essential for us to understand ourselves and how we can change.

Next, she discusses gender and sex differences in terms of how the former are flexible and the latter are not. The division of the human community into the two exclusive groups of male and female has important psychological implications on both conscious and unconscious levels. Most depth psychological theories of gender and sex have been androcentric, taking males as the norm for health, and have failed to develop a full understanding of desire, opposition, and idealization between the sexes.

One major theme in a depth psychology of gender is that of Woman as the object of desire. The Greek myth of Pandora deftly illustrates the problem of female beauty: as the "desire-awakening maiden" Pandora is powerful but empty. The link between female beauty, power, and evil teaches us about the consequences of female appearance as a commodity to be used among men. Zeus placed the curse of Pandora on humankind, as a punishment for the theft of fire from the gods, and we are still living with the effects of this patriarchal curse. The double bind of female beauty (damned if you engage it and damned if you don't) must be lifted from the male-female relationships in this time of growing equality and reciprocity between the sexes.

For women and men to reach their full potential of development as individuals and in relationships, they must break Pandora's curse and free themselves from the myth of the power of female beauty.

In working to liberate us from the curse of Pandora, Young-Eisendrath has developed a theory of desire: desire contains within it a primordial absence, a sense that something is missing. When we come to understand the nature of desire itself, we can be liberated from it domination.

Drawing on experiences from culture, everyday life, and psychotherapy, Polly Young-Eisendrath's Gender and Desire: Uncursing Pandora provides a full engagement with the intricacies and complexities of gender, desire, and liberation for women and men in a postmodern world.

The book is published by Texas A&M Press.

“A fascinating and stimulating book, very clearly written and easy to read, with a wealth of erudition supporting its narrative. In demonstrating the strength and prevalence of the Pandora myth in our present-day society, Young-Eisendrath reminds us to examine our assumptions, both as individuals and as clinicians.” (Journal of Analytical Psychology)
“This book is a delight to read. Her language is clear, her illustrative comments and examples, pinpointed.” (Psychological Perspectives)
"In writing about the nature of gender and desire, Polly Young-Eisendrath has once again focused her considerable intelligence on a complex (and complexing) subject, and has succeeded admirably in creating a thoughtful and insightful treatise. I found her arguments to be compelling and persuasive, and I think the book will be of great interest to both the professional analytic community and the general reading public." (Deirdre Bair)