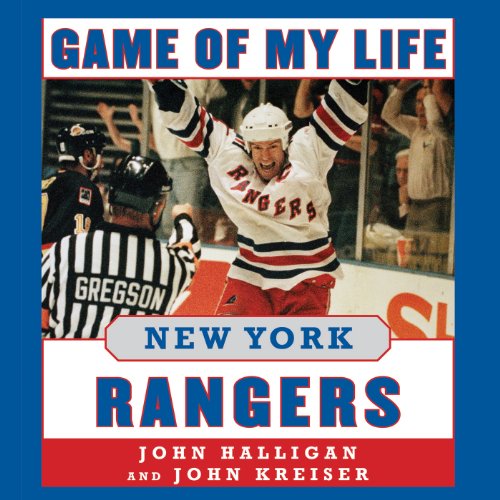 As one of the NHL's oldest teams and the first to win the Stanley Cup, the New York Rangers have a history studded with famous players and celebrated games. In former New York Rangers PR director John Halligan and NHL.com managing director John Kreiser's Game of My Life, 24 of the most talented and influential Rangers in history share their tales of success, as voiced by David Deboy. Though these legendary players, including Frank Boucher, Mark Messier, Wayne Gretzky, and Jaromir Jagr, all tell diverse and compelling stories, Deboy's warm and engaging narration is what unites them, drawing in listeners with its consistency and authority in stories both old and new.

Famous games and players have been the hallmark of the New York Rangers from their NHL debut in 1926 to the present day. From Frank Boucher and the original Blueshirts to Jaromir Jagr, the Rangers have thrilled their fans with some of the most memorable performances in hockey history.

In Game of My Life: New York Rangers, John Halligan and John Kreiser share the recollections of 24 of the most famous names in Rangers history as they discuss the most memorable games in their careers. Boucher describes the Rangers' first game; Clint Smith remembers what it was like to win the Stanley Cup in 1940; Mark Messier and the stars of the 1994 team share their memories of the games that ended the 54-year Cup drought; Wayne Gretzky talks about his final NHL game; and Jagr describes his feelings about setting team scoring records. Rangers fans will also enjoy descriptions of some of the most famous goals in team history by the players who scored them: Don Raleigh's two overtime winners in the 1950 Finals; Pete Stemkowski's triple-overtime tally in 1971; and Stephane Matteau's famous series-winner in 1994.

It's the best kind of anecdotal history, in which the people who made history are the ones doing the telling. Game of My Life takes readers inside the mind of each player and behind the doors of the locker room to reveal what really happened, and how it affected the people who were involved in some of the most memorable moments in New York hockey history.