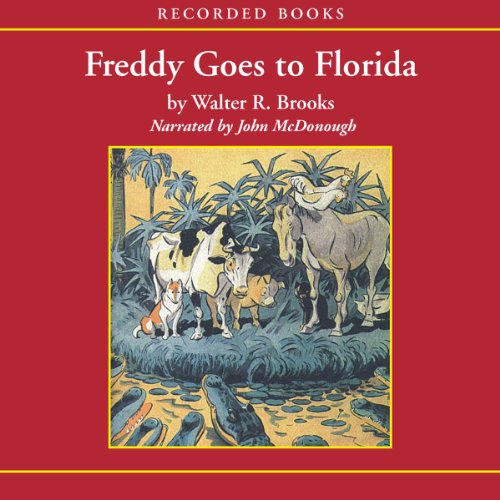 The barnyard animals are tired of being cold in the winter. Since Farmer Bean doesn't have enough money to patch the holes in the barn or heat the chicken coop, they are migrating to Florida for the winter.

Travelling to the beat of Freddy the pig's funny songs, they meet with one adventure after another. They find gold treasure to take home to Farmer Bean in the spring. Florida is fun, except for the time when alligators try to eat them for lunch. Only Freddy's cleverness lets them escape with their lives.

Writing during the first half of the 20th century, Walter R. Brooks captured the idyllic America that disappeared with the 1950s. Fans remember him as the creator of Mr. Ed, the talking horse of television fame. His tour-de-force was his set of 26 Freddy books, all espousing the values that people still want for their children: loyalty, sharing, and forgiveness. John McDonough's delightful voice captures the humor and genius of this timeless creation.