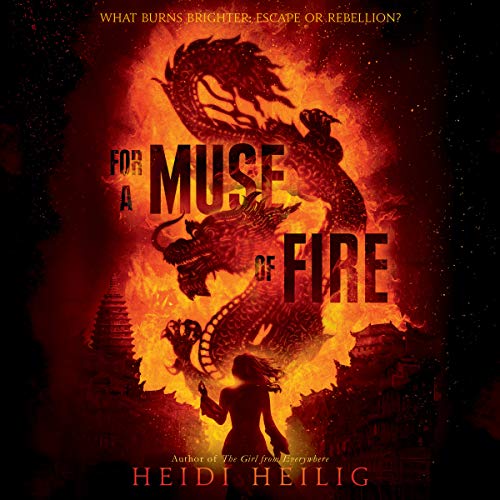 For a Muse of Fire

A young woman with a dangerous power she barely understands. A smuggler with secrets of his own. A country torn between a merciless colonial army, a terrifying tyrant, and a feared rebel leader.

The first audiobook in a new trilogy from the acclaimed Heidi Heilig blends traditional storytelling with ephemera for a lush, pause-resisting tale of escape and rebellion. For a Muse of Fire will captivate fans of Sabaa Tahir, Leigh Bardugo, and Renée Ahdieh.

Jetta’s family is famed as the most talented troupe of shadow players in the land. With Jetta behind the scrim, their puppets seem to move without string or stick - a trade secret, they say. In truth, Jetta can see the souls of the recently departed and bind them to the puppets with her blood.

But ever since the colonizing army conquered their country, the old ways are forbidden, so Jetta must never show, never tell. Her skill and fame are her family’s way to earn a spot aboard the royal ship to Aquitan, where shadow plays are the latest rage and where rumor has it the mad emperor has a spring that cures his ills - and could cure Jetta’s, too. Because seeing spirits is not the only thing that plagues her.

But as rebellion seethes and as Jetta meets a young smuggler, she will face truths and decisions she never imagined - and safety will never seem so far away.

Heidi Heilig creates a vivid, rich world inspired by Asian cultures and French colonialism. Her characters are equally complex and nuanced, including the bipolar heroine. Told from Jetta’s first-person point of view, as well as with chapters authored as play scripts and ephemera such as telegrams and letters, For a Muse of Fire is an engrossing journey that weaves magic, simmering romance, and the deep bonds of family with the high stakes of epic adventure.

Das sagen andere Hörer zu For a Muse of Fire