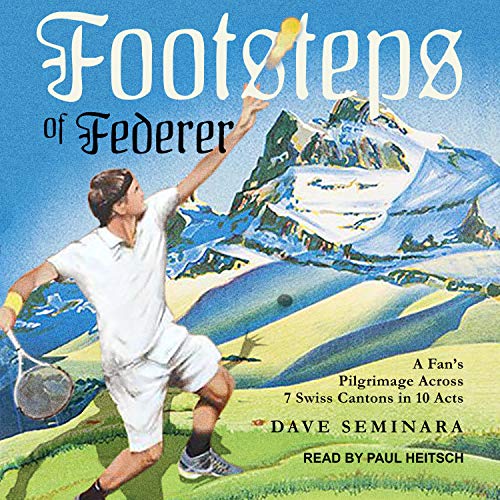 Roger Federer could live anywhere in the world, but he always returns to the place he loves most: Switzerland. Dave Seminara is a mad traveler and tennis lifer who has written about Federer for the New York Times and other publications. A pair of autoimmune diseases and a knee surgery kept Dave from playing tennis for years, but as he inched toward recovery, he had a bright idea: why not start his tennis comeback on hallowed ground - courts that his hero Roger Federer graced in Switzerland.

Footsteps of Federer is a funny, novella-length account of Seminara's travels across seven Swiss cantons in search of insights into Federer's character, which is inextricably linked to his deep roots in, and love for, his country. Seminara timed his unique pilgrimage to the 2019 Swiss Indoors, where he had a chance to ask Roger a number of offbeat questions before and after Federer hoisted his record 10th title there. Seminara's Federer pilgrimage took him to Switzerland's most important abbey, where he prayed with Abbot Urban Federer; to the vineyard of Jakob Federer from Berneck, where the Federer clan originated from; to the stunning villa where Roger and Mirka were married; and to many of the neighborhoods and tennis clubs where Roger has lived and trained at over the years.