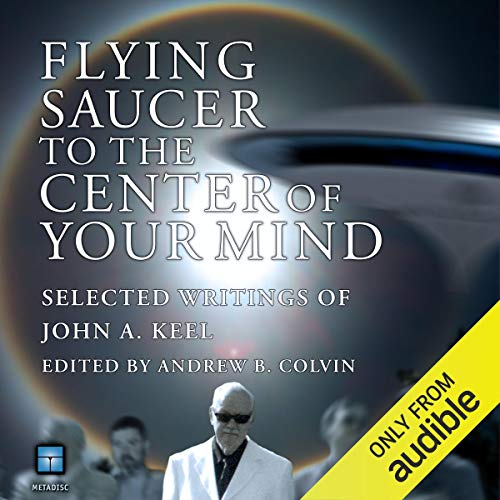 Flying Saucer to the Center of Your Mind

Flying Saucer to the Center of Your Mind

Flying Saucer to the Center of Your Mind is a collection of magazine articles and lectures by the man many consider to be not only the 20th century’s premiere investigator of all things unusual and “Fortean,” but also our very own 20th-century “Mark Twain”: John A. Keel. Many of the articles in this anthology and its companion volumes, "The Outer Limits of the Twilight Zone" and "Searching for the String," were revolutionary, and explored ideas popularized in Keel’s classic books. Written in Keel’s engaging trademark style, they are sure to delight fans with their fresh, unparalleled insights into the nature of reality.

John Keel displays the keen observational skills and investigative tenacity that made him the enfant terrible of ufology for decades. In this no-holds-barred analysis - much of it written almost 50 years ago - Keel shreds most of the sacred-cow beliefs still held by many in ufological and “cryptozoological” circles today, and presents theories so radical that they are only now becoming accepted: the “4-D” or “interdimensional” thesis; the “breakaway civilization” theory; the possible role of “ancient aliens” in human history; the synthetic and/or hallucinatory nature of many “alien abduction” and “Men in Black” encounters; the role of spy agencies in paranormal research; and the alarming connection between UFOs, animal mutilations, and attacks on unsuspecting humans.

In short, Flying Saucer to the Center of Your Mind is witty, incisive, impassioned, and prescient, and cohesively brings Keel’s message into focus in a way that perhaps no other collection has. In addition, this 2013 edition features illuminating forewords by noted writers Gray Barker and Tessa B. Dick (widow of science-fiction writer Philip K. Dick), as well as an introduction by the editor, Andy Colvin (author of "The Mothman's Photographer" trilogy and "Mothman Speaks").