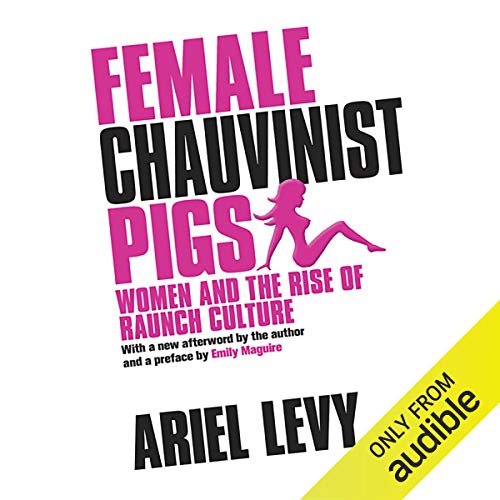 In her quest to uncover why this is happening, Levy interviews college women who flash for the cameras on spring break and teens raised on Paris Hilton and breast implants. She examines a culture in which every music video seems to feature a stripper on a pole, the memoirs of porn stars are climbing the best-seller lists, Olympic athletes parade their Brazilian bikini waxes in the pages of Playboy, and thongs are marketed to prepubescent girls. Levy meets the high-powered women who create raunch culture - the new oinking women warriors of the corporate and entertainment worlds who eagerly defend their efforts to be "one of the guys". And she traces the history of this trend back to conflicts between the women's movement and the sexual revolution long left unresolved.

In the tradition of Susan Faludi's Backlash and Naomi Wolf's The Beauty Myth, Levy pulls apart the myth of the Female Chauvinist Pig and argues that what has come to pass for liberating rebellion is actually a kind of limiting conformity. Irresistibly witty and wickedly intelligent, Female Chauvinist Pigs makes the case that the rise of raunch does not represent how far women have come, it only proves how far they have left to go.