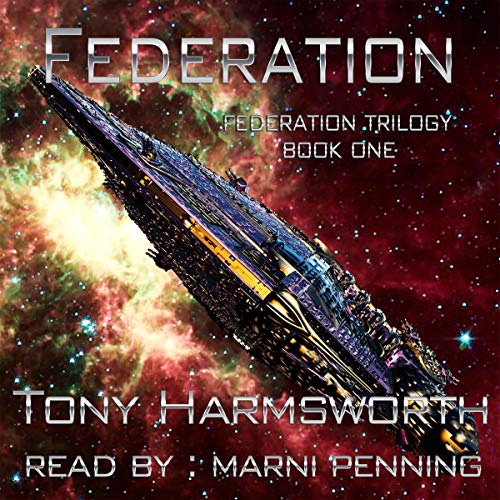 Federation - political, near-future science fiction for the listeners who enjoys imagining how the world would react to alien contact.

Author's Note: "This novel has attracted some strange and unexpected reactions - science fiction readers are usually open-minded individuals, but some seem to have trouble understanding that this is a story - fiction. In a few reviews, Federation has been castigated by narrow-minded individuals who think it is some sort of socialist or communist manifesto. Surely, that would be like accusing George Orwell of promoting totalitarianism because he wrote 1984! If you are open-minded, you will love this for being what it is - a science fiction 'what-if' trilogy, not a political treatise. Please don't buy it if you find social justice offensive."

Federation takes close encounters to a whole new level. A galactic empire of a quarter of a million worlds stumbles across the earth. When they ask, "take me to your leader", the world is thrown into panic. We have no world leader, only many who might like to be. With elements of a political thriller, there is an intriguing storyline which addresses the environmental and myriad social problems faced by the world today.

The aliens’ philosophy on life is totally unexpected. With the help of intelligent automatons, they've turned what many on earth believe to be a reviled political system into a utopia for the masses, but are they a force for good or evil, and will the wealthy make the compromises needed for a successful outcome?

The story is told by a Daragnen University Graduate, Rummy Breganin. He discovers that earth failed in its attempt to join the federation, and, for some unknown reason, members are forever banned from visiting or contacting the planet. Rummy had never heard of a whole world being outlawed. Perhaps it would be sensible to leave well enough alone but no, he decides to investigate.

Submerge yourself in humankind’s cultural and economic dilemma. Get Federation today.