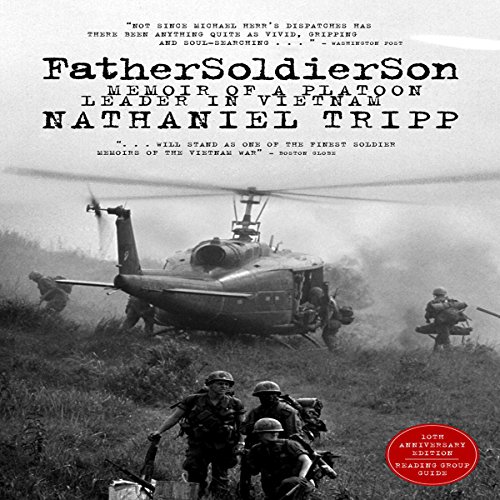 Father, Soldier, Son: Memoir of a Platoon Leader In Vietnam

Father, Soldier, Son: Memoir of a Platoon Leader In Vietnam

Nathaniel Tripp grew up fatherless in a house full of women, and he arrived in Vietnam as a just-promoted second lieutenant in the summer of 1968 with no memory of a man's example to guide and sustain him. The father missing from Tripp's life had gone off to war as well, in the navy in World War II, but the terrors were too much for him, he disgraced himself, and after the war ended he could not bring himself to return to his wife and young son. Tripp tells of how he learned as a platoon leader to become something of a father to the men in his care, how he came to understand the strange trajectory of his mentally unbalanced father's life, and how the lessons he learned under fire helped him in the raising of his own sons.

"Father, Soldier, Son will stand as one of the finest soldier memoirs of the Vietnam War . . . If all that has been written about the war in Vietnam, in fiction and nonfiction, has made it a familiar story to some, Tripp overcomes cliché by individualizing every well-known fact." ( The Boston Globe)
“A searing memoir . . . The reader can almost smell the dank Mekong River, the fear, the rotting flesh. Mud, blood and vegetation swirl on the page, and Mr. Tripp pounds home the sights and sounds.” ( The New York Times, a New York Times Book Review Notable Book of the Year)
"Not since Michael Herr’s Dispatches has there been anything quite as vivid, gripping and soul-searing," ( The Washington Post)