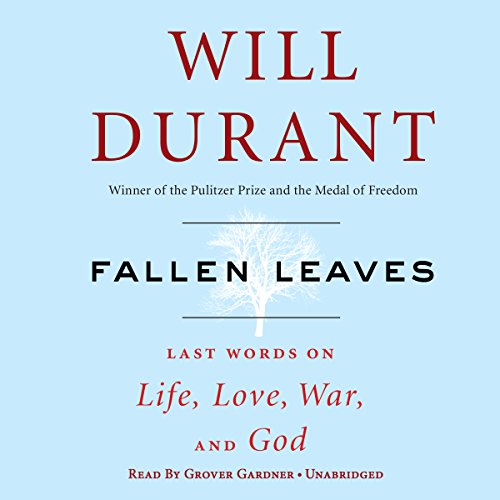 The final and most personal work from Pulitzer Prize - winning author and historian Will Durant - discovered 32 years after his death - is a message of insight for everyone who has sought meaning in life or the council of a wise friend in navigating life's journey.

From 1968 to 1978, Will Durant made four public allusions to the existence of Fallen Leaves. One, in 1975, hinted at its contents: "a not very serious book that answers the questions of what I think about government, life, death, and God." And in 1975: "I propose... to answer all the important questions, simply, fairly, and imperfectly." Even into his 90s,he worked on the book daily, writing it out on legal notepads. Upon his death in 1981, no one, not even the Durant heirs, knew if he had completed it, or even if it still existed. Thirty-two years later, in a granddaughter's attic trunk, the manuscript was discovered.

Fallen Leaves is Will Durant's most personal book. It is precisely as he described: 22 short chapters on everything from youth and old age, religion and morals, to sex, war, politics, and art. The culmination of Durant's 60-plus years spent researching the philosophies, religions, arts, sciences, and civilizations from across the world, Fallen Leaves is the distilled wisdom of a gifted scholar with a renowned talent for rendering the insights of the past accessible. In its preface Durant mentions that over the course of his career, he received letters from "curious readers who have challenged me to speak my mind on the timelessquestions of human life and fate." With Fallen Leaves, he accepted their challenge. It contains strong opinions, elegant prose, and deep insights into the human condition as only Will Durant could provide, as well as his revealing conclusions about the perennial problems and greatest joys we face as a species.

Listen to him. Even if you don't agree with him on everything. This man has seen it all. He'll skilfully convince us of the value of moderation in everything: life, money, morals, and philosophy. It's a guide to life like no other. If you're consciously looking for arguments against philosophical pessimism, you'll find it here. I just wish he'd equally drawn upon lessons from non-western history. But again, as Mr. Durant himself was acutely aware, one cannot be free from one's context or history.