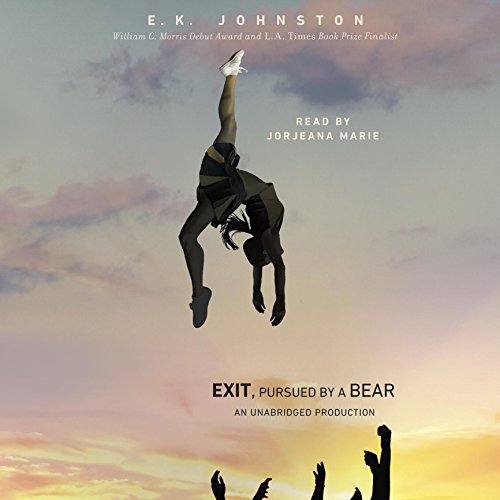 Exit, Pursued by a Bear

Hermione Winters is captain of her cheerleading team, and in tiny Palermo Heights, this doesn't mean what you think it means. At PHHS, the cheerleaders don't cheer for the sports teams; they are the sports team - the pride and joy of a tiny town. The team's summer training camp is Hermione's last and marks the beginning of the end of...she's not sure what. She does know this season could make her a legend. But during a camp party, someone slips something in her drink. And it all goes black.

In every class there's a star cheerleader and a pariah pregnant girl. They're never supposed to be the same person. Hermione struggles to regain the control she's always had and faces a wrenching decision about how to move on. The assault wasn't the beginning of Hermione Winter's story, and she's not going to let it be the end. She won't be anyone's cautionary tale.

"E.K. Johnston's latest gripping novel for young adults...is both a well-plotted whodunit and a tightly woven examination of how we as a society respond to - and often judge - rape victims." (The Chicago Tribune)

"A powerful rape survival story to make you believe in a better world." (The Rumpus)

Nice story and great characters, but except for the names and some quotes it doesn't have much to do with the story of The Winter's Tale. I really loved the girl empowerment theme, so I still enjoyed it.