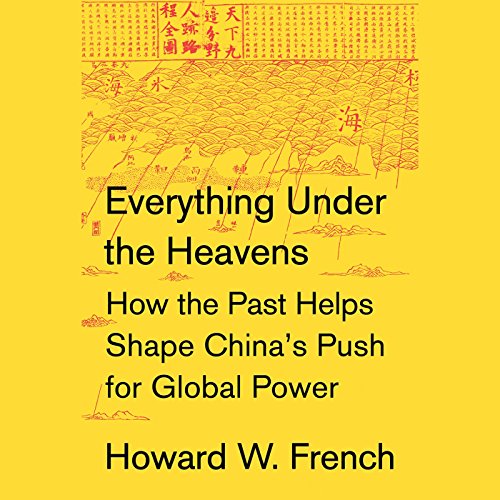 Everything Under the Heavens

Everything Under the Heavens

From the former New York Times Asia correspondent and author of China's Second Continent, an incisive investigation of China's ideological development as it becomes an ever more aggressive player in regional and global diplomacy.

For many years after its reform and opening in 1978, China maintained an attitude of false modesty about its ambitions. That role, reports Howard French, has been set aside. China has asserted its place among the global heavyweights, revealing its plans for pan-Asian dominance by building its navy, increasing territorial claims to areas like the South China Sea, and diplomatically bullying smaller players. Underlying this attitude is a strain of thinking that casts China's present-day actions in decidedly historical terms, as the path to restoring the dynastic glory of the past. If we understand how that historical identity relates to current actions, in ways ideological, philosophical, and even legal, we can learn to forecast just what kind of global power China stands to become - and to interact wisely with a future peer.

Steeped in deeply researched history as well as on-the-ground reporting, this is French at his revelatory best.

"Nuanced...The detail of [French's] scholarship and reporting is matched by the suppleness of his prose...This will be a useful, and necessary, starting point for informed discussion." ( Publishers Weekly)
"Howard French has tackled what is perhaps the most important issue of our time, and of many years to come, with the vivid prose of a first-rate reporter, the scholarship of an excellent historian, and great human sympathy." (Ian Buruma, author of Year Zero: A History of 1945)
" Everything Under the Heavens is the most persuasive account I've ever read of how China's history shapes its foreign policy and that of its neighbors today. A subtle and beautifully written book that offers surprising lessons for how Americans and Asians should respond to China's rise. Strongly recommended for policy makers and citizens alike." (Susan Shirk, chair of the 21st Century China Center, University of California-San Diego)

Das sagen andere Hörer zu Everything Under the Heavens