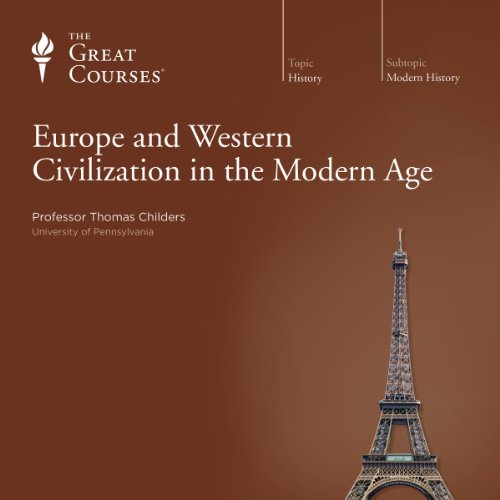 Europe and Western Civilization in the Modern Age

Only three lifetimes ago, Europe was a farming society ruled by families of monarchs. But with two seismic tremors-capitalism and democracy-Europe's economic and royal foundations were shattered forever and modern European history began.

In this series of 48 fascinating lectures, Professor Childers makes the history of Europe from the 1750s to the present-events both horrible and magnificent-as immediate as today's headlines, employing the historian's craft and a storyteller's skill to find the causes of what otherwise could seem to be the march of folly. The result is an intellectually exhilarating journey through a period of three lifetimes such as the world had never experienced. You'll see how in the span of just one life, England became an industrial, urban culture; tens of thousands were guillotined in France; Napoleon's Empire - the greatest since Rome-rose and fell; and revolution swept the capitals of Europe; how in the span of just one more, the Russian serfs were freed; Italy and Germany were created from a loose collection of city-states; European powers divided and conquered Africa; Darwin, Marx, Freud, and Einstein published world-shaking ideas; and millions died in a Great War; and how in that third lifetime, the world was plunged into economic depression, global war, and genocide; Europe abandoned its African colonies; the Soviet Union rose and fell; Fascism and Communism failed as democracy became the dominant form of government; and the same European powers that had bled each other for hundreds of years created a Common Market and unified currency.