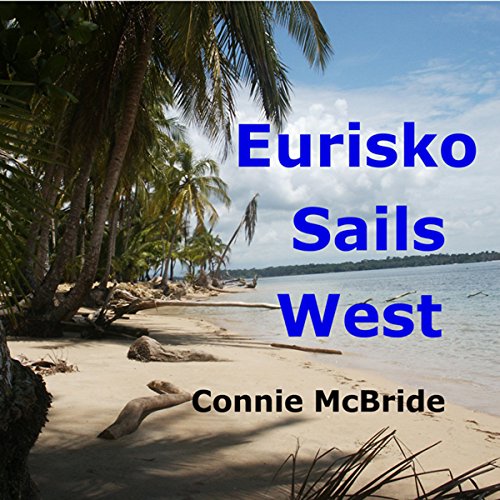 "As the turquoise glow of Round Reef faded and the island became a ship's outline, anchored, promising to be there if we ever needed to come home, I said a silent goodbye. Beneath the nervousness was a bit of heartache, too. Leaving home is never easy, even when it is what you want most in the world."

After exploring the Eastern Caribbean for several years on their 34-foot Creekmore, Connie McBride, her husband, and their 16-year-old son sailed away from their adopted home of St. Croix, west across the Caribbean to Bocas del Toro, Panama. What they found there will delight the reader as the archipelago comes alive in Eurisko Sails West: A Year in Panama. Howler monkeys, red frogs, and sloths in the jungle are accompanied by a symphony of parrots, oro pendula, toucans, and macaws.

But Panama has more to offer this family than jungle. Coral reefs, deserted beaches, and surf are all within an easy day sail. Local Indians in dugout canoes paddle or sail past, offering fish and lobster. A group of Indian children admire their Christmas tree, and in exchange for an impromptu Spanish lesson, the McBride's share their fish catch with the children's 13 family members. After a few months of exploring Bocas del Toro, the family travels inland. Costa Rica offers not only adventure, cloud forest, and black sand beaches, but also unforeseen complications. The Panamanian mountain town of Boquete becomes their base for climbing the country's highest point: Volcan Baru. And David - Panama's third largest city - is both an escape from the outpost town of Bocas and the family's salvation during an emergency. But it is the people they meet during their stay in Panama that enrich their lives.

Removed from his friends, girlfriend, and island he calls home, their guitar-playing surfer son, struggling to grow up in a country whose language he barely speaks, becomes a favorite playmate of the Indians from the local village. He teaches them to play sports and card games; they teach him how to open a coconut with a machete, the importance of cultural differences, and tolerance.

Far from a cruising guide or a travel log, Eurisko Sails West: A Year in Panama is an experience - a family adventure that allows the reader to explore the beauty and challenges of sailing and living in rural Panama. When a medical emergency prevents them from leaving the country, decisions become more difficult and have shocking consequences. Neighbors who had become friends transform into rescuers, and in the end, we are all reminded of the importance of appreciating life and those we share it with, wherever we may be.