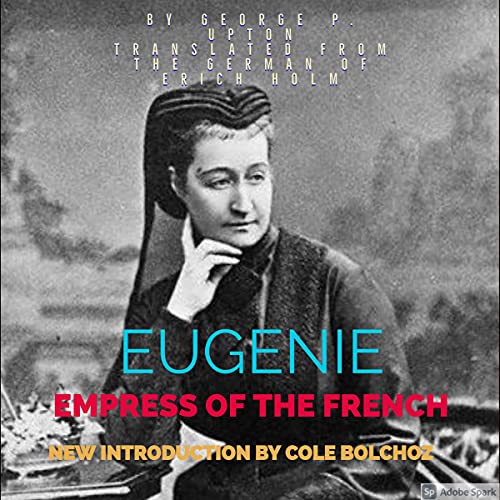 Eugenie Empress of the French

If one is a fan of the Dowager of Downton Abbey, then this book is one not to miss.

Princess Eugenie of France was the original Lady Diana of Parisian-Revolutionary-Victorian Society. Her life was full of turmoil and triumphs, encouraging anyone who has suffered to embrace her strength of character and compassion. This work was originally translated from German in 1910, 10 years before her death. The seconda author has attempted to shed new light on her impact on European History. Though this attempt is light indeed.

Originally published by the late George P. Upton in 1910, the Widow Empress symbolized a passing but lasting cultural matriarch on European culture. Eugenie introduced the high heeled riding boot to amazed ladies in France. Her fashion style was imitated by both European royalty and the Bourgeoise throughout the Victorian Age.

Yet her poignant life even art could not reflect. With a new introduction with new sources demonstrating the life and character of the Empress, listeners are now in a better position to connect with the late Empress. For more than all the jewelry, pomp, and circumstance of the Second French Republic, Eugenie remains a lady most of us would want to have tea with.