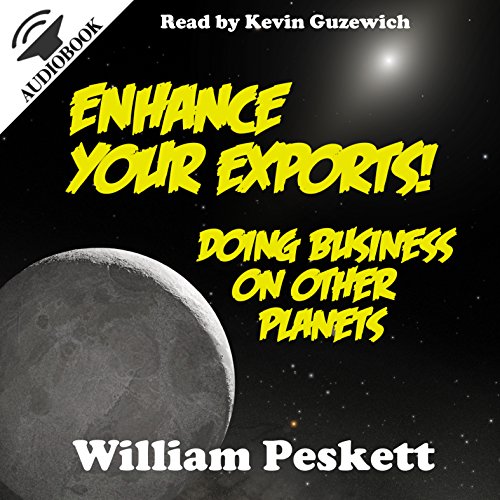 Enhance Your Exports! Doing Business on Other Planets

On the face of it, this is the story of Dave Smart, business studies lecturer, as he leads a group of three colleagues on a tour of discovery to the Smiling Disc star system, 19 light years from home. Their main purpose is to investigate business practice on Kalista-mm, the larger of the system's two planets, and gather material for Dave's new book, 'Doing Business on Other Planets'.

Visits to a sulphur mine, an old-established bank, and a drinks company give the Earthlings surprising insights into the way of life of aliens who have developed along somewhat different lines from us. It's not only that they have big moustaches and white blood, or that they drink sulphuric acid and lay eggs. The inhabitants of Kalista-mm are the epitome of political incorrectness, and are disarmingly honest about it.

But is this all there is to it, or does the author's domicile in Thailand hint at some more terrestrial satire in the story? Is Kalista-mm an allegorical Asia? Certainly the Kalistan-mms have some Asian speech characteristics, and the humans' confusion and awe when presented with ways of doing things so different from the ones they're used to on Earth is remarkably similar to Westerners' bafflement when confronted with practices in Asia.

Either way, the main benefit of studying a way of life different from ours is that it teaches us more about ourselves. The group's observations provide plenty of scope for taking cruel swipes at many of things we hold precious: government, big business, justice, democracy, climate change, science, religion, and do-gooders generally. It all adds up to a hilarious jaunt around a little-known quadrant of the galaxy (or the world) and a satisfying dig at many of our own sacred cows.