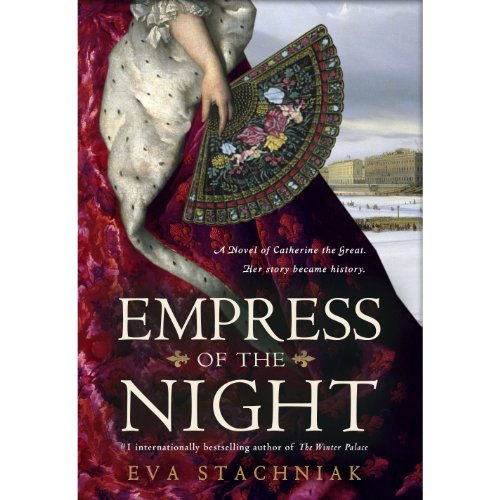 Empress of the Night

Perfect for fans of Hilary Mantel, Alison Weir, and Philippa Gregory, Empress of the Night is Eva Stachniak’s engrossing new novel, told in the voice of Catherine the Great as the Romanov monarch reflects on her ascension to the throne, her rule over the world’s greatest power, and the sacrifices that made her the most feared and commanding woman of her time.

A critically acclaimed historical drama and instant number-one international best seller, The Winter Palace brilliantly reimagined the rise of Catherine the Great through the watchful eyes of her clever servant Varvara. Now, in Eva Stachniak’s enthralling new novel, Catherine takes center stage as she relives her astonishing ascension to the throne, her rule over an empire, and the sacrifices that made her the most feared and commanding woman of her time.

As the book opens, the charismatic monarch is in her final hours. From the fevered depths of her mind, Catherine recalls the fateful trajectory of her turbulent life: her precarious apprenticeship as Russia’s Grand Duchess, the usurpers who seek to deprive her of a crown, the friends who beg more of her than she was willing to give, and her struggle to know whom to trust and whom to deceive to ensure her survival.

"We quarrel about power, not about love," Catherine would write to the great love of her life, Grigory Potemkin, but her days were balanced on the razor’s edge of choosing her head over her heart. Power, she learns, is about resolve, strategy, and direction; love must sometimes be secondary as she marshals all her strengths to steer her volatile country into a new century and beyond - to grow the Romanov empire, to amass a vast fortune, and to control a scheming court in order to become one of history’s greatest rulers.

Gorgeously written with vivid detail and lyrical prose, Empress of the Night is an intensely intimate novel of a woman in charge of her fortunes, who must navigate the sorrows, triumphs, and hopes of both her soul and a nation.