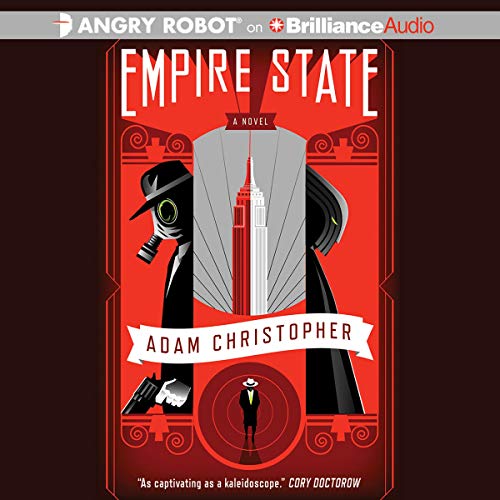 The Empire State is the other New York.

It’s a parallel-universe, Prohibition-era world of mooks and shamuses that is the twisted magic mirror to our bustling Big Apple. It’s a city where sinister characters lurk around every corner while the great superheroes who once kept the streets safe have fallen into deadly rivalries and feuds. Not that its colourful residents know anything about the real New York...until detective Rad Bradley makes a discovery that will change the lives of all its inhabitants.

Playing on the classic Gotham conventions of the Batman comics and HBO’s Boardwalk Empire, debut author Adam Christopher has spun a smart and fast-paced superhero-noir adventure that will excite genre fans and general readers alike.

“A fascinating debut novel that meshes noir sensibilities and science fiction together, and keeps the reader guessing throughout.” (Mike Stackpole, best-selling author of I, Jedi)
“Destined to be a science fiction classic, Empire State is a breathtakingly original noir tale of intrigue, mystery, and quantum physics.” (Diana Rowland, author of My Life as a White Trash Zombie)