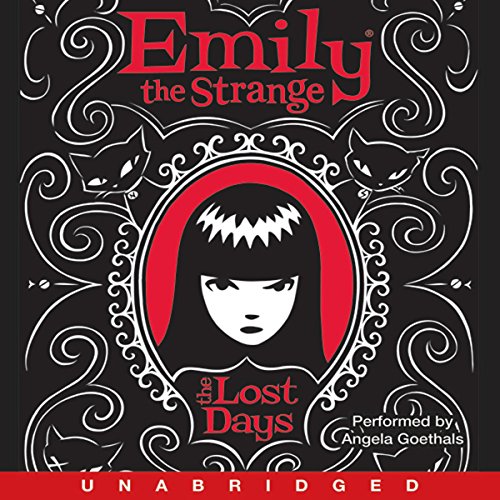 Though Emily the Strange's image first appeared on a skateboard, she now populates comic books, graphic novels, and novels like The Lost Days. In short, Rob Reger's gothy misfit icon has taken on a life of her own in the literary universe as well as in the fashion world - and much of her autobiography is fan-driven.

Film and television actress Angela Goethals kinetically performs the novel, of which Reger said, "This is the first time anybody gets to hear how [Emily] talks to herself and her cats." Goethal is known for capturing audio for popular characters. She has performed numerous other young adult titles with fan approval, including The Sisterhood of the Traveling Pants series.

There are 13 elements you will find in the first Emily the Strange novel:

Emily the Strange: 13 years old. Able to leap tall buildings, probably, if she felt like it. More likely to be napping with her four black cats; or cobbling together a particle accelerator out of lint, lentils, and safety pins; or rocking out on drums/ guitar/saxophone/zither; or painting a swirling feral sewer mural; or forcing someone to say "swirling feral sewer mural" 13 times fast . . . and pointing and laughing.

Strange, I loved it. Great speaker, too. I've just re-listened. Pity there aren't any more recent books, maybe even with a slightly older Emily.