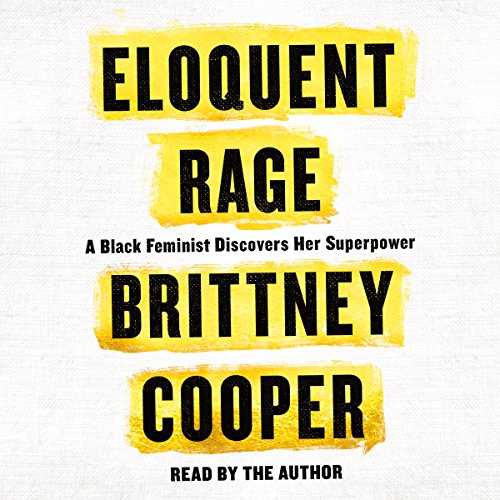 With searing honesty, intimacy, and humor too, America's leading young Black feminist celebrates the power of rage in this piercing new audiobook.

So what if it's true that Black women are mad as hell? They have the right to be. In the Black feminist tradition of Audre Lorde, Brittney Cooper reminds us that anger is a powerful source of energy that can give us the strength to keep on fighting.

Far too often, Black women's anger has been caricatured into an ugly and destructive force that threatens the civility and social fabric of American democracy. But Cooper shows us that there is more to the story than that. Black women's eloquent rage is what makes Serena Williams such a powerful tennis player. It's what makes Beyoncé's girl power anthems resonate so hard. It's what makes Michelle Obama an icon. Eloquent rage keeps us all honest and accountable. It reminds women that they don't have to settle for less.

When Cooper learned of her grandmother's eloquent rage about love, sex, and marriage in an epic and hilarious front-porch confrontation, her life was changed. And it took another intervention, this time staged by one of her homegirls, to turn Brittney into the fierce feminist she is today. In Brittney Cooper's world, neither mean girls nor f--kboys ever win. But homegirls emerge as heroes. This audiobook argues that ultimately feminism, friendship, and faith in one's own superpowers are all we really need to turn things right side up again.

"I was waiting for an author who wouldn't forget, ignore, or erase us black girls as they told their own story...I was waiting and she has come - in Brittney Cooper." (Melissa Harris Perry)
"Cooper may be the boldest young feminist writing today. Her critique is sharp, her love of Black people and Black culture is deep, and she will make you laugh out loud." (Michael Eric Dyson)

"...Cooper delivers a frank, conversational-style examination of the importance of black female friendships, respectability politics, and harmful stereotypes, among other topics. She blends candor and humor as she roots out toxic behaviors and beliefs we use in America to tear ourselves and each other down, while also offering paths forward. Listeners learn how rage, aimed with fine-tuned focus and purpose, can help build up black women's lives and society overall." (AudioFile Magazine)