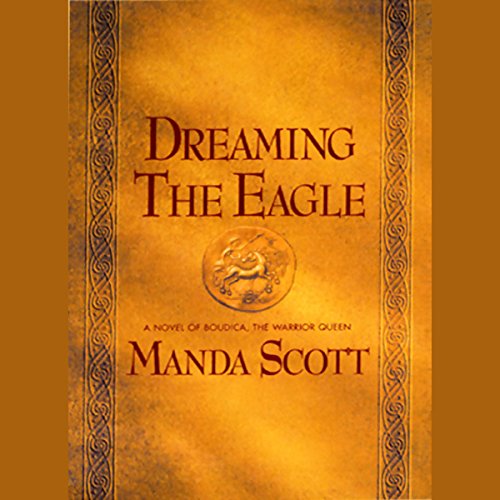 Dreaming the Eagle is the first part of the gloriously imagined epic trilogy of the life of Boudica.

Boudica means "Bringer of Victory" (from the early Celtic word “boudeg”). She is the last defender of the Celtic culture in Britain; the only woman openly to lead her warriors into battle and to stand successfully against the might of Imperial Rome - and triumph.

It is 33 AD, and 11-year-old Breaca (later named Boudica), the red-haired daughter of one of the leaders of the Eceni tribe, is on the cusp between girl and womanhood. She longs to be a Dreamer, a mystical leader who can foretell the future, but having killed the man who has attacked and killed her mother, she has proven herself a warrior. Dreaming the Eagle is also the story of the two men Boudica loves most: Caradoc, outstanding warrior and inspirational leader; and Bàn, her half-brother, who longs to be a warrior, though he is manifestly a Dreamer, possibly the finest in his tribe’s history. Bàn becomes the Druid whose eventual return to the Celts is Boudica’s salvation.

Dreaming the Eagle is full of brilliantly realized, luminous scenes, as the narrative sweeps effortlessly from the epic - where battle scenes are huge, bloody, and action-packed - to the intimate. Manda Scott plunges us into the unforgettable world of tribal Britain in the years before the Roman invasion: a world of druids and dreamers and the magic of the gods, where the natural world is as much a character as any of the people who live within it; a world of warriors who fight for honor as much as victory; a world of passion, courage, and spectacular heroism pitched against overwhelming odds.

Dreaming the Eagle stunningly recreates the roots of a story so powerful its impact has lasted through the ages.

“What’s amazing to me about this tale of Boudica, Britain’s legendary female warrior, is the pitch-perfect fluency with which Manda Scott brings it forth . . . like an eyewitness recounting real events that she saw and participated in. Her reimagining of this age, when the tribes of Britain clashed with the legions of Rome, includes interior monologues, multiple points of view, dreams, visions, ecstasies, and interlocutions with the dead, all of it utterly convincing and compelling . . . . A stunning feat of the imagination and an absolute must-read for lovers of historical fiction.” (Steven Pressfield, author of Tides of War and Gates of Fire)

"A truly remarkable story full of wonderful atmosphere.... Intensely exciting, a tale of passion, courage, and heroism against huge odds, which is intensely moving." (Publishing News)