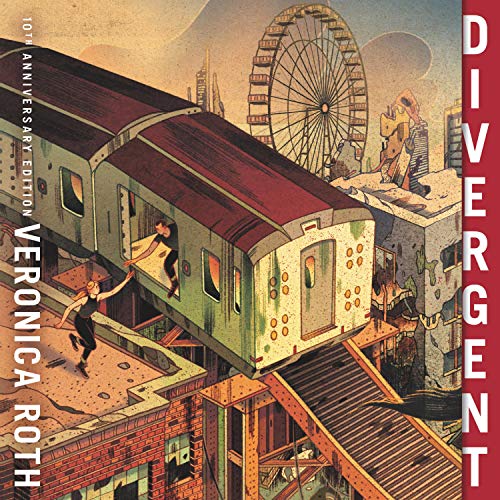 It is a very rare thing to witness the beginning of a writer’s career and know without a doubt that the first little book is going to launch a worldwide craze, a la J.K. Rowling or Stephenie Meyer. Such is the terrifying yet enviable position of Veronica Roth, who sold this debut novel to a HarperCollins imprint before she even finished college. She also sold the film rights to Summit Entertainment, owner of the Twilight film saga, on the strength of pre-publication buzz alone. The first in a planned series, Divergent is beyond question the best thing to happen to young adult literature in a very long time. More realistic than Harry Potter and less moony-eyed than Twilight, Roth has crafted a world and a protagonist that are easily engrossing and definitely worthy of our long-term attention.

Part of the credit for such charm belongs to narrator Emma Galvin, herself somewhat a newcomer. The young upstart has already garnered praise for her interpretations of Winter’s Bone, the first book spin-off from the Glee television series, and Stephenie Meyer’s recent novella. Galvin is genuinely edgy and emotive, not a trace of sugar to be found in the dialogue or her rendering of it. She captures the bold but conflicted spirit of the main character, Tris, with convincing personality and a real sensibility for the fast-pacing learning curve into which Tris launches the year she turns 16. After being raised in a clan whose primary characteristic is its devotion to selflessness, Tris defects, choosing a life of bravery from among the five factions that comprise her dystopic Chicago. She must pledge the faction, and go through several rounds of training eliminations before becoming a true Dauntless.

Tris is a complex, down-to-earth character with a lot of soul searching to do  in a clan where hobbies include jumping from moving trains and tossing knives at small objects resting on the heads of friends, and there are no second chances. Veronica Roth has built a remarkable situation with strong potential for a longevity that will remain fresher than the sum of its parts, and Emma Galvin has this bull of a new series firmly by the horns. This book is confidently going places far beyond the fanatical mindlessness of young adult marketing, and in a hot minute, grownups will not have to feel one iota of shame for having fallen in love with it alongside their less discerning teenagers. Megan Volpert

In Beatrice Prior's dystopian Chicago, society is divided into five factions, each dedicated to the cultivation of a particular virtue - Candor (the honest), Abnegation (the selfless), Dauntless (the brave), Amity (the peaceful), and Erudite (the intelligent). On an appointed day of every year, all sixteen-year-olds must select the faction to which they will devote the rest of their lives. For Beatrice, the decision is between staying with her family and being who she really is - she can't have both. So she makes a choice that surprises everyone, including herself.

During the highly competitive initiation that follows, Beatrice renames herself Tris and struggles to determine who her friends really are - and where, exactly, a romance with a sometimes fascinating, sometimes infuriating boy fits into the life she's chosen. But Tris also has a secret, one she's kept hidden from everyone because she's been warned it can mean death. And as she discovers a growing conflict that threatens to unravel her seemingly perfect society, she also learns that her secret might help her save those she loves.... or it might destroy her.

"Though Galvin’s narration is concentrated on giving Tris the perfect voice, she never neglects the secondary characters. Poignant moments with Tris’s mother and Four, her leader and love, are subtly nuanced to let listeners hear the terror Tris often hides.... listeners will hold their breath waiting to see if she can survive the day." ( AudioFile)

A lot of tension

The world is divided into fractions, which cover characteristics of human world. It lets you imagine the diffrent scenes like real happenings. You are searching with Tris your real identity.

One of my favorite books

I love the parts when it is thrilling and listening also gives me an idea of how that character felt when those part happened.

The book is about teens, fighting, jumping off buildings and discovering love. It is very entertaining.

After the world has been torn apart by war, different factions are formed that each blame different human qualities for wars. The concept of politically controlling emotions and categorizing people is interesting. The question of why humans wage wars and how to avoid them is always relevant.

My only minor critique would be, that the book is somewhat simple.

Do not expect to get your mind blown but expect some very good entertainment and a lot of fun!

I love this book. If listend to it for 4 times.
And it will not be the last time!
Read or listen, you will love it!