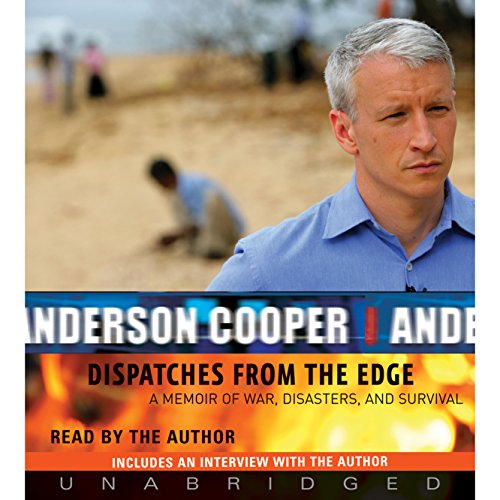 Dispatches from the Edge

Dispatches from the Edge

Anderson Cooper has a pleasant, distinctive, and recognizable voice, but that's not the reason he's effective as the narrator of this memoir of war, disasters, and survival. The book is a compelling listen because Cooper is a talented writer, filling his text with riveting images and compelling phrases. The images speak for themselves. But Cooper's narration is not without energy and emotion. He parcels them out, using them for effect at just the right moments. Cooper moves effectively between reporting on the cataclysmic events of (from the tsunami through Hurricane Katrina) and reflecting on his childhood and early professional career. The audio concludes with an interesting interview with the author.

Few people have witnessed more scenes of chaos and conflict around the world than Anderson Cooper, whose groundbreaking coverage on CNN has changed the way we watch the news.

After growing up on Manhattan's Upper East Side, Cooper felt a magnetic pull toward the unknown. If he could keep moving, and keep exploring, he felt he could stay one step ahead of his past, including the fame surrounding his mother, Gloria Vanderbilt, and the tragic early deaths of his father and older brother.

But recently, during the course of one extraordinary, tumultuous year, it became impossible for him to continue to separate his work from his life. From the tsunami in Sri Lanka to the war in Iraq to the starvation in Niger and ultimately to Hurricane Katrina in New Orleans and Mississippi, Cooper gives us a firsthand glimpse of the devastation that takes place. Writing with vivid memories of his childhood and early career as a roving correspondent, Cooper reveals for the first time how deeply affected he has been by the wars, disasters, and tragedies he has witnessed, and why he continues to be drawn to some of the most perilous places on earth.

Striking, heartfelt, and utterly engrossing, Dispatches from the Edge is an unforgettable memoir that takes us behind the scenes of the cataclysmic events of our age and allows us to see them through the eyes of one of America's most trusted, fearless, and pioneering reporters.