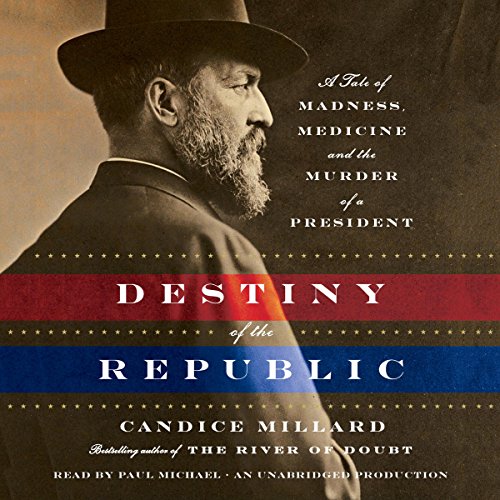 Destiny of the Republic

James A. Garfield may have been the most extraordinary man ever elected president. Born into abject poverty, he rose to become a wunderkind scholar, a Civil War hero, and a renowned and admired reformist congressman. Nominated for president against his will, he engaged in a fierce battle with the corrupt political establishment. But four months after his inauguration, a deranged office seeker tracked Garfield down and shot him in the back.

But the shot didn’t kill Garfield. The drama of what hap­pened subsequently is a powerful story of a nation in tur­moil. The unhinged assassin’s half-delivered strike shattered the fragile national mood of a country so recently fractured by civil war, and left the wounded president as the object of a bitter behind-the-scenes struggle for power—over his administration, over the nation’s future, and, hauntingly, over his medical care. A team of physicians administered shockingly archaic treatments, to disastrous effect. As his con­dition worsened, Garfield received help: Alexander Graham Bell, the inventor of the telephone, worked around the clock to invent a new device capable of finding the bullet.

Meticulously researched, epic in scope, and pulsating with an intimate human focus and high-velocity narrative drive, The Destiny of the Republic will stand alongside The Devil in the White City and The Professor and the Madman as a classic of narrative history.

"[Millard demonstrates] the power of expert storytelling to wonderfully animate even the simplest facts....make[s] for compulsive reading. Superb American history." ( Kirkus)
"Splendidly insightful....stands securely at the crossroads of popular and professional history" ( Booklist)
“Sparklingly alive…[Millard] brings to life a moment in the nation’s history when access to the president was easy, politics bitter, and medical knowledge slight. Under Millard’s pen, it’s hard to imagine its being better told.” ( Publishers Weekly)